such a serene scene of the seaside... 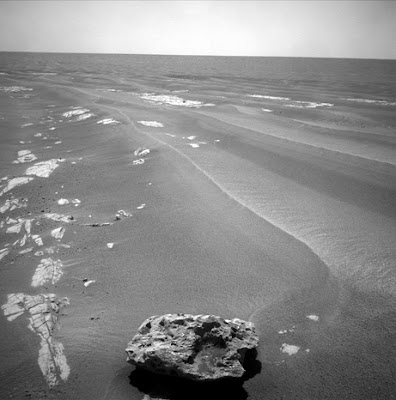 but wait, no its NOT! its a photo taken by the opportunity exploration rover on MARS! the robust little rovers are still alive on the surface of mars, even though they were scheduled to parish many many sols ago.

the future is looking pretty grim for the spirit rover which is currently stuck in a ditch of soft sand. there remains little hope for movement, even though many tests are being performed on earth to figure out how to rescue it :(

opportunity keeps trucking along, though, and recently found the rock pictured above! NASA scientists call it "block island" and it very well might be a meteorite that has landed on the surface of mars after millions of years of traveling around our solar system. its interesting that it has no crater around it?! several such rocks have been found by the rovers on mars, but its too difficult to determine their true origin from available data.

It's fairly obvious to me from this picture that the origin of Mars' landscape was documented in a movie. It's called Mad Max. You should check it out; you migh learn something. :-P

(P.S. is sarcasm allowed on this blog?)

sarcasm is much appreciated :)

no evidence yet seen for a thunderdome on mars.

Can the stuck rover still provide useful data (soil analysis, etc) or does it's immobility make it useless?

Are you sure it mars? could be bournemouth beach taken in black and white?