while walking around the ruins of pompeii, italy, the most famous of the cities devastated by the 79 AD eruption of mt. vesuvius, a rain storm hit, and the few visitors who braved the november chill, were covered by water from the sky. i didnt mind the rain, as i was prepared for the potential downpour, and the finals stages of the storm created a fantastic rainbow! 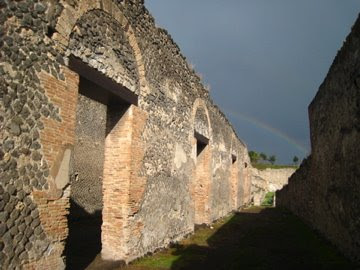 at the appearance of the rainbow, i scrambled around the larger-than-expected ancient city to find the best place to catch a glimpse of the full arch, and to take a few photos! 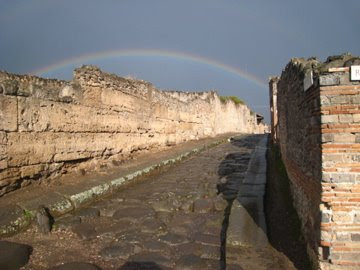 after finding my favorite spot, i relaxed for a while to look at the refractive phenomenon. the top color of the primary rainbow is red - then moving on down towards the inside of the arc you see red, orange, yellow, green, blue, indigo, violet - roy g. biv. the colors are created because the raindrops act like little prisms as the sun rays pass thru them. sunlight gets reflected and refracted all over as it encounters the different surfaces of raindrops. the primary rainbow is created by those rays that pass into the raindrop, get reflected off the back surface, and then pass thru the surface of the raindrop again upon exiting! the light gets refracted twice - once for each time it passes through the raindrop's surface. 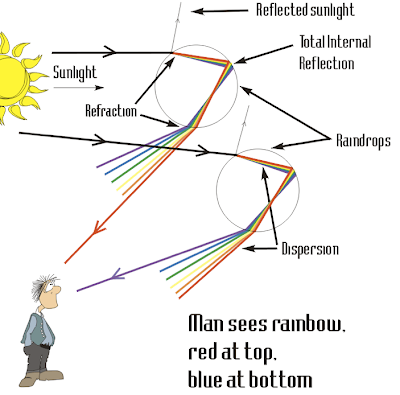 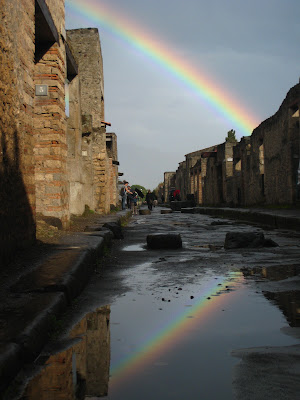 in fact, the sky really is brighter below the rainbow! there is a lot of light exiting the raindrop after being once reflected inside. the most light emerges at 40-42 degrees, where we see the concentrated primary rainbow. there is also a lot of light that emerges at smaller angles than the rainbow ray, but almost no light emerges from the single internal reflection with angles greater than the rainbow ray. as a result, the excess of light scattered inside the arc causes the sky below the rainbow to look brighter than above! 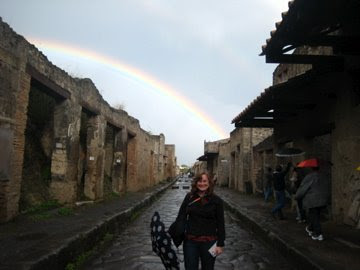 i just love these phenomena of the sky!

My favorite rainbow photo is the late Galen Rowell's Rainbow over the Potala Palace... http://www.mountainlight.com/gallery.tibet/images.html

that is a nice image!

i think my favorite rainbow photo is the first one at this link - the rainbow over alaska: