we all live on a pale blue dot we call earth, which orbits around the sun, along with many other planets, rocks, and dust, to form our solar system. the sun, along with about 400 billion other stars, make up our the milky way galaxy. the milky way galaxy is one of the biggest galaxies inside our gravitationally bound local group of galaxies. there are roughly 45 observed galaxies in our local group. the milky way and the andromeda galaxy (M31 - shown below) are the largest galaxies in our group, while the others are all tiny little asymmetrical things like the clouds of magellan (small and large), the draco dwarf galaxy, the carina dwarf spheroidal galaxy, et cetera, and my new personal favorite: dwingeloo 1 (i just think the name is awesome)! 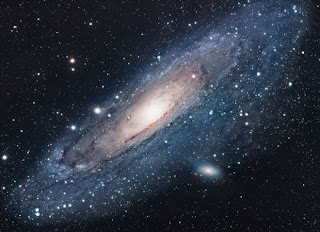 the milky way and andromeda galaxies dominate our local group. they dance around each other, spinning in circles around their shared gravitational center, while all the small galaxies cluster around the two big ones. slowly, the two massive spiral galaxies will shrink the distance between them, spiraling closer and closer, until they eventually become one galaxy. i say they are moving slowly because it will take them another 4 billion years or so to fully merge, but andromeda approaches the milky way at 300,000 km per hour!!!

our visual intuition of what a galaxy merger looks like is generally not what really happens. you see no massive fireworks that you might assume would occur when those billions of stars smash into each other. the thing is... stars nearly *never* come into violent contact! the distance between individual stars is so huge, that even though both andromeda and the milky way have hundreds of billions of stars each, it will be very unlikely that any two will get close enough to feel each others heat! just think that our sun's nearest stellar neighbor, alpha centauri, is 4 light years away! it takes *light* 4 years to travel to the closest star to our sun. thats *very* far away! even inside of densely packed globular clusters, star dont collide.

so if nothing explodes when galaxies collide, what do mergers look like? here are some examples of simulations that show the eventual merging of andromeda and the milky way. the merger will take place in about 4 billion years, so nothing to fear... don't worry! in fact, if humans were still around as that time approached, it would be fantastic because you could see the andromeda galaxy shining in the sky! you can see it now with the naked eye as a tiny little smudge... if you know where youre looking on a very clear night.

here's a quick video showing how the two massive galaxies will come together. the first time they go near each other, they pass thru each other like ghosts (no fireworks). gravitational forces dominate the interaction, drastically warping each galaxy.

this excerpt from a full program shows the collision in a bit more detail. the video clip describes the sloan digital sky survey during the first 4 minutes (this is where the galaxy zoo gets its millions of galaxies), and then shows visualizations of the milky way - andromeda collision starting around minute 4. they also show what the night sky might look like from earth's surface when the warped milky way disk and the beaming bright andromeda spiral dominate the view!

here's a scientific simulation produced by the N-Body Shop at the university of washington. props to them for displaying their very cool, physically motivated simulations on youtube for all to enjoy! this video shows how the milky way galaxy may have formed, with many small objects coming together under gravity's influence to form one galaxy.

One thing I never understood is that if the Andromedia galaxy is moving toward us. Then, why did Edwin Hubble see a red shift when he studied the Andromeda galaxy. Doesn't a red shift indicate that an object is moving away from us on the doppler scale?

hubble used cepheid variable stars inside the andromeda galaxy to determine its distance, and deduce that it was an "island universe" outside of our milky way galaxy.

years later he measured the redshifts of many galaxies to find that the more distant a galaxy is from us, the faster away it's moving - the greater it's redshift. except for galaxies in our local group, including andromeda. i'm not sure what hubble's actual measurement of andromeda was, but modern instruments show andromeda to a slight blueshift, along with about 100 other galaxies out of the millions observed!

Looks like one question I thought of was already asked and already replied :D.
question two - watching the simulation first thought came to my mind was motion water currents at different temperatures, the way they merge with each other .... has any equivalent phenomenon in daily occurance been observed.

i'm not sure if such studies have been compared, unsui, but i've alway thought it fascinating how similar hurricanes and spiral galaxies look. the same conservation laws of angular momentum and energy apply to both scenarios, but gravitational and pressure forces are quite different. interesting!

Stars do collide in globular clusters - that's what makes "blue stragglers" and similar exotic stars. I think the timeframe is about once every 10,000 years or so.

Hubble saw red shifts for galaxies outside the local group.

In one of my astro exams soln. the examiners are saying that "Andromeda Galaxy and the Milky Way are moving around the centre of our local
group of galaxies. In the course of this motion, they just happen to be coming
closer to each other. Their mutual gravitational attraction does not play any
significant role in this motion."
Is that true coz i'm losing a lot of marks coz of that.
I thought that they moved together because of each other gravity...