LHC - down for the count

considered by most to be the most complicated piece of technology ever created by human kind, it's no wonder that a couple technical glitches finally suspended operations at the large hadron collider. as a press release from CERN revealed yesterday, a large helium leak and a faulty electrical connection have stopped scientists ability to slam proton beams together at amazingly high speeds! well, they actually hadnt started the collision phase yet, but now they wont be able to try again until at least next spring, while they fix the present malfunctions! 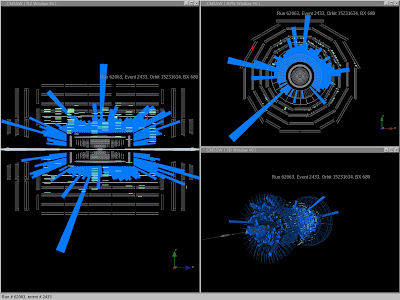 the image above is a small hint at things to come. it shows "the debris of particles picked up in the detector's calorimeters and muon chambers after the beam was steered into the collimator (tungsten block) at point 5." cool!

As a Project Manager - My heart goes out to the project that has gone off track. And I am amazed that the "Sponsors" are ready to let it slide till next spring.

Hmmmm If I had been more patient in my student days, I could have been on projects like these... one with no deadlines Sigh !!!