questions from the weekend

this weekend, i've been asked two questions over and over:

1) is it true that only 5% of all (US) americans have passports?

2) are you scared the earth might end when physicists recreate the big bang on wednesday?

number two is easy to answer: NO!
(and huh? they're not actually recreating the big bang, they're just setting up experiments that produce energies similar to those that occured after the big bang, for tiny itty bity little pieces of time. these types of events occur all the time naturally on earth: cosmic ray events. read more HERE)

as for numero uno, i havent been able to find any solid statistics on how many american citizens have passports, but the average report shows 15% (+/- 10%). this apparently sounds absurd to many british folks, who have dozens of countries so close by that it would seem silly and inconvenient not to have a passport. i dont remember being asked this question when i lived in other parts of the world, but it has been a common theme during my two weeks in the UK!

consider that the average american worker has 2 weeks of vacation a year. this is not a lot of time (and one of the reasons i want to keep working abroad, or stick to the academic lifestyle)! with one of your two weeks, you'll probably visit family around the holidays, and with the other week, you'll go to a beach or a national park or a city in the US. san francisco and florida aren't foreign, but they are far away from the midwest, exotic, and not as intimidating as jumping across an ocean where you most likely dont speak the language.

one week is not a long enough time to travel across an ocean. if youve never been out of your country before, one week is not enough time to get adjusted to the time change, feel comfortable enough to relax, and really experience another culture. with so much diversity inside of one large country, and so little vacation time available, why would the average american need a passport?

i have two large families and only a couple members actually had passports prior to me moving out of the country and convincing them they needed to come visit me! 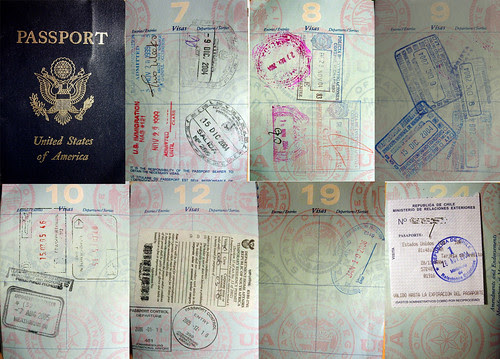 in all honesty, it's not easy to travel internationally. nearly everyone i've come across in my travels has been wonderfully hospitable, helpful, and friendly. but occasionally i intersect with a person who assumes all americans are hopeless (and/or as crass as our current president). that situation is never fun to deal with.

also, it's difficult to initiate motivation to travel so far away when its so uncommon for your family and friends. my friends growing up went to florida with their families for their week summer vacation, they never considered going to another country! i was fortunate to have two fantastically strong role models in my aunt and older sister! not as many young americans are lucky enough to be so regularly in contact with people who travel internationally. also, i'm lucky enough to have a career that provides me oppotunnities to travel if i want.

in my travels, i've found the perspective gained from leaving my home country to be immeasurable. i've learned to appreciate the amazing convenience of living in the US. with some effort, people truly have the freedom to live the "american dream" and do nearly anything they might want (aside from marrying a person of the same sex, and a few other odd restrictions). what concerns me most is that it's simple to take such freedoms for granted when you never have the opportunity to leave their protection long enough to see the conditions of a place where such freedoms don't exist.

People forget how big the US is compared to European countries. If we had to have a passport to go between states than almost all of us would have one (Texas is bigger than France, after all :)). Plus, you don't (didn't?) need a passport to go to Canada or Mexico - my family took driving trips to both sans passports. So we have a whole continent to explore. What percentage of the British have been to other continents?

Also, it is expensive to go overseas! I don't blame my parents for driving our family of four to beach vacations rather than shlepping the kids on long, expensive plane rides overseas. Although I do agree that international travel is important and fun and I love to do it whenever I can now!

tsk, what would the TSA say if they saw your posted passport photos? Fortunately, they are too far from you (in miles and bureaucratic forms) to know.