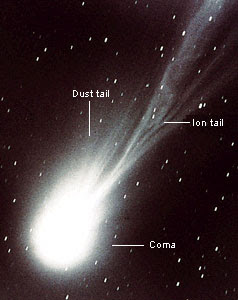 this weekend welcomes the peak of the annual orionids meteor shower. meteor showers occur when the earth passes thru a spot in space where a comet once passed. comets have long tails made of gas and dust (shown above is halley's comet), and some of that stuff gets left behind as the comet shoots close to the sun and back out to the edge of the solar system (kinda like how a kid who plays in a sandbox manages to track sand onto almost everything until he or she takes a shower!!). if the earth passes thru one of these debris trails of a comet, then those little left-behind particles of dusty material go thru our atmosphere and burn up from a pressure front! they are traveling very fast when they hit earth's atmosphere, so as they burn up, they shoot like fireballs across the sky producing what we commonly call "shooting stars"... what astronomers call "meteors." if they dont burn up completely in the atmosphere and they reach earth's surface, we call them meteorites.

on its orbit around the sun, the earth happens to pass thru a place where the famous halley's comet once passed! it takes us one year to orbit around the sun to return to this same spot, so we always see the orionids meteor shower during the same time each year... in late october. the name, orionids, comes from the direction we see the meteors in the sky... towards the constellation orion, as shown below.

if you dont remember seeing orion in our evening sky recently, thats because you havent from the northern hemisphere! orion rises in the east around midnight. so if youre awake this weekend, preferably sunday or monday nights, go outside between midnight and dawn to see 12-20 "shooting stars" per hour!!

here's a bit more history about the orionids meteor shower if youre interested!