i hope the rain keeps up

it has been raining non-stop in austin since i returned. so weird!! i enjoy a good rainstorm, but there hasnt been a lot of thunder and lightning yet and those are the best. instead, it's just a ton of water keeping the creeks nice and full, preventing me from riding my bike anywhere and making it nearly impossible to enjoy the night sky or play with the old telescope before i have my first public viewing night this friday.

while standing in the rain at the bus stop today, i started thinking about the great lightning storms in ohio and my family... most likely instigated by the fact that i bought a plane ticket today to go home and visit in october! yeah!

when i was a kid, my grandpa used to tell me all kinds of one-liners that equally confused and intrigued me.

i hope the rain keeps up!

i used to think about that one every time he said it! i thought he was weird at first... who wants to get wet when walking to their car? but he had a certain smirk on his face when he said it that made me think there was something else to his odd statement. at some age i figured it out, but would still have to remember his little trick every time he said it! sneaky grandpa.

if you run fast enough, you can make it between the raindrops!

i never believed this one as a kid, but i didnt know why. i tried many times to run between the raindrops... when no one was watching, of course... but it never quite worked. as an undergrad i got to thinking about that grandpa-line again and came up with my own little proof as to why he wasnt right. if i'm driving in my car during a steady yet mild rainstorm and i have the windshield wipers set to a certain frequency, when i slow down to stop at a red light, i inevitably have to slow the frequency of swipes... or be horribly annoyed by their screeching squeal! when i start driving again, i have to speed up the wipers because there is more rain on the windshield. during a few second interval, the same surface area of my windshield is sweeping out more volume and therefore more raindrops per second than when the car is stationary. so... my body actually gets hit by *more* raindrops when i try to run faster thru the rain and my grandpa is wrong! ha ha! i never told my grandpa about this theory of mine but i think he reads this blog so maybe he'll have something to say about it! 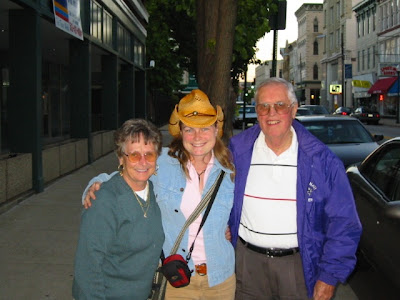 rain rain go away. come again some other day.

I had a physics teacher who posed the raindrop question on a final exam, with the hint "your cat knows the right answer."

who are you callin' a geek?