i had goose bumps the whole time i read this article about mini medical robots. they are inserted into the human body thru an incision then they can creep off to some deep area to take pictures and deliver drugs. i'm a little creeped out that they look like roaches or little beetles! but i'm also weary with the realization that humans are actually approaching the technological level where debate over our ethical responsibility regarding these robotic creations must commence. 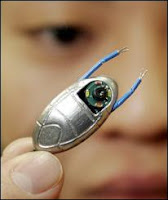 i work with advanced technology for pure scientific research. i perform no tests on humans and, other than collaboratively contributing a wee bit to our universal knowledge base, what i do right now doesnt affect anyone in their day to day lives. i wonder what scientists and engineers think about when developing robotic technology that is used to alter and save lives... or when they create robots that mimic our skills, but lack our consciousness.

is the development of robotic technology inevitable? are there any kinds of robots that shouldnt be created (because they would take away jobs? because they could cause harm to humans?)? can conscious robots exist? if so, what makes a human a human and a robot a robot? consciousness and free will seem to me to be the phenomena most difficult to duplicate. science tells me that my body and brain are complicated collections of atoms that work together thru inevitable chemical reactions that i have seemingly no control over. but... i *can* contemplate the universe (as a career!) and decide what i want to do when i grow up and whether or not to commit a crime or drink a beer or where to go on vacation or anything. how does that happen? to the best of my knowledge, no one has figured that out, so how could this ability possibly be implemented in a robot? and if robots develop consciousness or relative independence, who decides the proper ethical behavior toward robots?

2. A robot must obey orders given it by human beings except where such orders would conflict with the First Law.

3. A robot must protect its own existence as long as such protection does not conflict with the First or Second Law.

south korea has just devised the first government-supported ethical code for robots (probably loosely based on asimov's laws). the "robot ethics charter" will set guidelines for how robots will be treated assuming service robots will eventually become part of daily life..... although they havent been bold enough to tackle the discussions brought forth last year by the European Robotics Research Network (EURON): should sex-toy robots be designed? Henrik Christensen from EURON claims "people are going to be having sex with robots within five years." this possibility has already been introduced to us by movies and TV shows... including the humanoid cylons on battlestar galactica (the only tv show i watch anymore... thanks itunes)!

anyway, i still think the medical beetle is creepy.... but the technology is definitely cool. it guides us to further consider the benefits of space exploration with the aid of explorers that are not nearly as fragile as our humanoid selves. my very favorite robots were developed by NASA to explore our rocky red neighbor: the mars rovers. They were designed to explore mars for 90 days.... but miraculously today is day 1130 for the spirit rover!!! this is absolutely astounding! go team go!

here's a video about the rovers from discovery news:

you can see the entire NASA-created animation of the rover from take off to landing on mars here.