that might be what the sunset would look like if you lived on "Kepler-16b" (astronomers still arent very good at naming things...)

there are currently 680 known exo-planets, which is a dramatic increase to the last time i remember checking, which was just a few months ago, and there were about 560 or so! exciting astronomical times to be living in for sure!

i knew this announcement was coming today because all day yesterday, i could hear my office-neighbour, simon o'toole, talking on the phone to several newspaper reporters, radio people, and various other media outlets about it. simon searches for planets too and is the AAOs resident expert on all things exo-planetary. as he described to the sydney morning herald:

"When you have two stars forming close together you have a big cloud of gas and dust and gravity pulls this into a disc of material which orbits both stars. If there is enough gas and dust left over you can get a planet."

since i knew this announcement was coming today, i wore my star wars t-shirt to work in honor of the new system :) 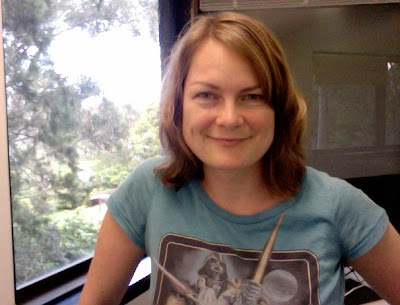 note the great view from my new office (i can hear very odd and interesting bird sounds all day), and my new hair cut!

(i'll update this post with a fun photo later today.....)

I absolutely adore that you wore that shirt for the announcement. And your new hair looks great!

The planet news is pretty sweet too. ;)

Ditto Charlie, especially about the hair..! And that smile is especially precious.!!

Another gas giant at -100C of course.

Hello Amanda:
I see that the force is with you!
Yes we do live in a very interesting astronomical time.Now for us to find life elsewhere would be the icing on my cake of existence !
Peace and Clear Skies!
7718