some food in taiwan

anyone living in australia during the last ~year knows how exorbitantly priced bananas have been since the floods hit queensland and wiped out most of the crops.

anyone who knows me reasonably well understands how devastated i have been about this unfortunate occurrence! but despite my love of bananas, i refuse to pay $15 to $20 AUD per kilo (or even more) for this delicious fruit.

now i hope everyone can appreciate just how big my eyes must have grown today at lunch with astronomers in taiwan, when i was finishing my bowl of noodles and the woman placed on our table one tasty, tiny, bright yellow, gorgeous looking banana for each of us!!

maybe it wasnt the best early impression to make on the professionals here, but i dont really care, because i was incredibly excited. and after hearing the sad story of the floods, i was offered another banana, which i happily accepted! 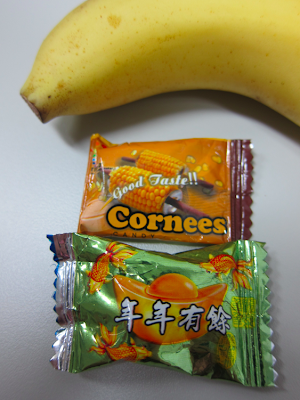 the other dessert offering was a bowl of hard candies. i took two that looked peculiarly interesting, pictured above. one was corn flavoured, which didnt seem quite as odd as the apparently goldfish flavoured sweetie. the fish one was colored pink and surprisingly tasted quite good! i ate it first in case it was horrid and i needed to cover the flavour. this was a mistake, because the brown colored "cornee" thing was absolutely awful! i cannot do any more justice to the flavour other than to say that i had to spit it out.

in other food news: sushi-flavoured pringles!?! 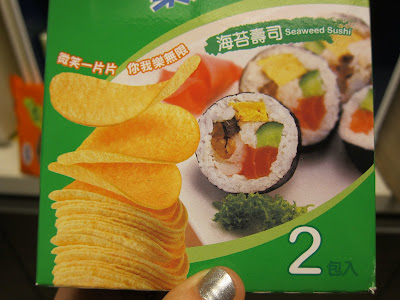 ps. there were probably supposed to be at least 10 hyphens in the post, but i gave up trying to remember the rules and just removed them all! please forgive me (or teach me...).

This won't necessarily help with the banana situation, but at least you'll know you're not alone: http://www.youtube.com/watch?v=PrmBWtOWYsA

(actually that's a lie. This is the best version I could find!:
http://www.youtube.com/watch?v=PrmBWtOWYsA
)

If you were serious about the dashes...here's a starting point: Dashes: The long and short of it. (Yes, an article on my blog about hyphens and dashes.)

Oh, new foods in other countries-- one of my favorite things!

I have to ask: "flavoUr"? Was that a conscious decision?

and brian, did you notice the lack of "coloUr"? this was mostly to amuse and confuse myself.

the other day i said "rubbush bin" without thinking about it.

It's funny that the crop failure of bananas in Australia should make them so expensive. The banana crop in the UK is pretty poor every year yet they're one of the cheapest fruit (per kg) here. I guess it's a matter of having importers and a supply chain set up, etc...

Yeah; I noticed! Writing "flavour" multiple times alongside "color" really threw me off. I may have assumed it was a typo otherwise.

Then again, for some reason, my fingers enjoy typing "behaviour" instead of its American cousin, and I don't know why.