a talk, a recital and dumplings

the populations of taiwan and australia are roughly equal at 23 million people, yet taiwan is an island 500 km (310 mi) long and 200km across, while mainland australia is over 7.5 million square kilometers! taiwan has roughly 200 professional astronomers compared to australia's 500.

after my talk yesterday, there was a reception with an array of snacks set out to welcome a mexican concert pianist who gave an amazing piano recital! the event was to honor mexican and tawainese relations as they move forward to build a telescope in mexico with the aim of detecting small (~1 km diameter) objects in the Kuiper Belt at the edge of our solar system.

listening to piano music in a lovely recital hall is now officially my favorite way to relax after giving a talk.

my hosts then took me out to dinner to a very famous dumpling restaurant in taipei city. there were many people standing outside waiting and i thought we would never get into the tiny place, but they took our table of six up and up and up 5 flights of stairs to a room with a large table!

the food was incredible! some of the steamed dumplings actually had soup inside so they morphed their shape as i picked them up with my chopsticks, dipped them in the vinegar, soy sauce, and ginger mixture, and placed them on my spoon to cool. the bite was an explosion of goodness.

i was so entranced by the textures and flavours of the food and the scientific conversation, that i forgot to take any photos! i realized this at the end of the meal and so my hosts insisted on ordering another round of red bean dessert buns so they could take this photo for me ;) 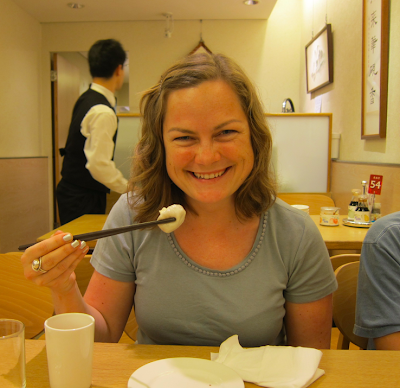 Hi Amanda:
Looks like you are now a member of the Astro Dumpling Gang.
Peace and Clear Skies!
7718