for some reason i've always had a talent for finding four-leaf clovers. i have no idea why.

while walking across the neighborhood to a friend's house when i was young, i glanced down and thought i saw, among the grass and clovers, a four-leaf clover! i stopped, took a slow step backwards, leaned down hopefully, and found it again!! i was so excited when i confirmed my find that i could hardly believe that just next to it... was another!?! woah!! then i saw another and another and another.... and wondered if i had found the luckiest patch of clovers on earth? i collected all the four-leaf clovers i could find in that little patch and ran back home to show my mom (and to show off to my sister ;) 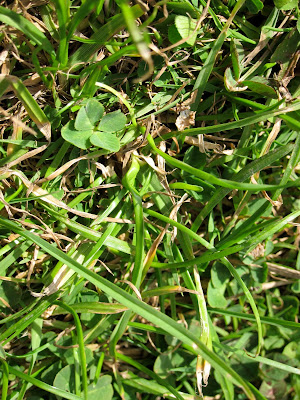 there's something about the abnormal symmetry of the four-leaf clover that is unique enough that my eyes seem to spot it instantly, even amid a huge patch of three-leaf clovers. i always thought, even as a kid, that i was finding the clovers with genetic aberrations, and wondered why it was only this particular genetic irregularity that we commonly consider "lucky."

the first time i observed with a big hands-on telescope, i recognized the benefit of my peculiar talent. a telescope is not usually pointing exactly where you want it to point at the beginning of the night. you have to adjust its position slightly in order to align it to exactly the correct coordinates. you usually have a reference image taken previously from some other telescope in the world, and then you take an image with your telescope and try to match the patterns found in the stars of each image until you find matching patters and can digitally nudge your telescope. depending on the instrument, you could be comparing two images with different orientations, rotations, flips, and/or flops.

the first time i had to do this, i found the process fascinating. i noticed that i was pretty good at the pattern matching bit and realized i had finally found a practical use for my four-leaf-clover-pattern-finding ability!

the point of all this is that i havent found many four-leaf clovers in the UK since i moved here two years ago. i've started wondering whether the four-leaf phenomenon is as environmental as it is genetic, because there are certainly lots of clover patches around here! i dont really know enough about biology to give any more information, but i do know that recently i've been finding a lot more four-leaf clovers in the UK, as you can see in the image above that i took in england's lake district!

i decided to leave that one growing in the ground for someone else to find again. good luck!

I always think that I see a 4-leaf clover on the ground, only to bend over and find that the extra leaf came from some clover hiding underneath, or some other trick of the eye. I wonder what that says of me as an astronomer? (Actually, I too am a great pattern-finder and am good at lining up images; I have never consciously noticed that as an astronomical skill.)

i have never found a four leaf clover...except the one that is taped to my friends fish tank! As for patterns, I am not so great at seeing those but I do have a keen eye for finding small details in things! What a fantastic story, thanks for sharing it!

Probably people have been looking for four-leaf clovers for longer in the UK than in the US which has produced an evolutionary pressure against that genetic variation here. Or maybe there's a sensible reason for the difference.

Never found a 4 leaf clover, but even if we did, we prefer hard truths over comforting fallacies.

Have you any Irish blood in your family?! :)

I too have the ability to find four-leaf clovers with ease. My record is 441 in one day when I was 10 years old. I still see a patch of clovers and just have to glance at it to be able to tell if there is a four-leaf in the patch. I have always wondered if anyone else could do this too, so I checked Google and there are a few of us I out there I guess. One guy attributes his synesthesia for his ability. I have never been diagnosed with that, but I am able to recognize patterns with an unusual ease. So we are rare in our ability. Too bad it's not a money maker.
JillJConner@gmail.com