the three types of knowledge

i was in school for a long time. essentially, i never left, its just that now instead of taking tests, i have to create new knowledge, convince my "peers" that the new information is interesting, and struggle to find jobs every couple of years.

as i really began to focus on one field during my phd studies, i realized one particularly fascinating and frustrating fact: the more i learned, the more questions i had! the more knowledge i gained, the more i realized i *didnt* know! and i became acutely aware during the build-up to my PhD defense that there were lots of things i learned in classes that i'd already forgotten, and all sorts of topics that i should review before defending because i felt i didnt know them well enough... overwhelming.

BUT, considering that i am in such a specialized field, i realized just how much potential information existed in the universe that i didn't even know i didn't know!! ... daunting.

the interesting twist is that the ratio of these categories of information changes throughout one's life, and i dont think there exists a "perfect" combination. certainly there is no universal combination that we can all strive for, because we're each so different!

the entire article i mentioned above is hilarious and well worth the read, but i want to share the pie charts here, because they are a nice and clever summary of the possible evolution of the ratio of these three types of knowledge.

this is what we start out with: 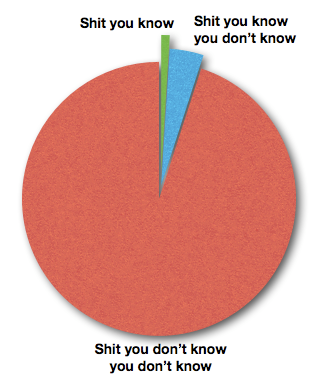 and as he points out "this chart is not to scale; the red slice is unimaginably large."

then we move on to the goals of education. learning more should mean there is less you don't know, right? 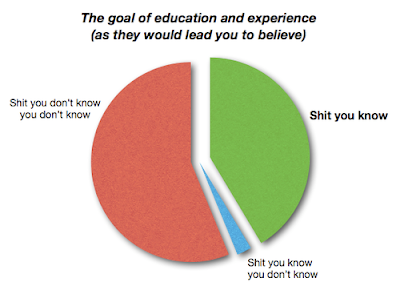 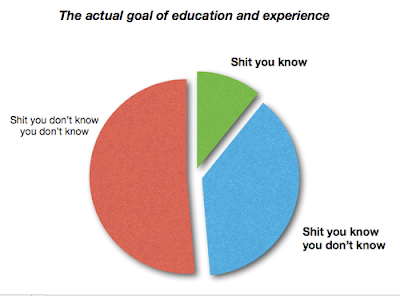 in my opinion, the real goal is to be curious... to be aware of what's going on, to question why, to investigate the things that interest you, to recognize things that don't work, and to do what you can to make those things "better" in your local community, or in the world if you can reach that far.

"the cure for boredom is curiosity. there is no cure for curiosity."
-- dorothy parker

Cool post and it gives Rummy's obsfuscation on the Iraq War a bit of support as well!

And every hour of every day Im learning more
The more I learn, the less I know about before
The less I know, the more I want to look around
Digging deep for clues on higher ground...

I liked those three types of knowledge by S. Schwartz. I'm tempted to add a 4th one to it; "things you don't know you know". I think that exist too, but is very difficult to utilze.

I very well recognize that feeling you describe; the more you study a subject, the more your realize how little you know. I think the big explosion comes when you take off from undergrad text book level and start to dig into the research literature (journals). And you get the shock for the second time when you leave the subjects you worked on in your MSc and PhD and start on something completely different in your first job. I have found that the knowledge that keep you floating in that case is mathematics, the language of science.

Not sure what your field is; astrophysics? astronomy?

Interesting, for me it's: The shit i know, the shit i know i don't know, and the shit i could give a shit if i ever know. At times, i think having limited capacity to even fathom things is a blessing. And i always default to: Is this knowledge going to serve me in any way? Im curious about knowledge that will serve me in a very utilitarian way.