scanning electron microscopes (SEMs) were developed in the 1950s and are widely used in medical science. SEMs have the power to magnify objects hundreds of times more than regular optical microscopes because they monitor the way electrons react with a surface instead of focusing photons of light through lenses to form an image.

below is an image created by chris supranowitz using an SEM. can you guess what the long path is? 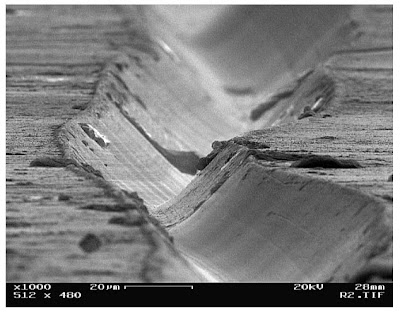 its the groove in a vinyl record. awesome!

you can also put your 3D glasses to use and check out the anaglyphs of many different objects featured in the study mentioned above!

While X-rays are produced, that is not what you are looking at there. That is almost certainly a secondary electron image. See:
http://en.wikipedia.org/wiki/Scanning_electron_microscope#Detection_of_secondary_electrons