saturn's moons play games with the space craft cassini in today's astronomy picture of the day. the tiny moon tethys pokes around the side of saturn's largest moon, titan. 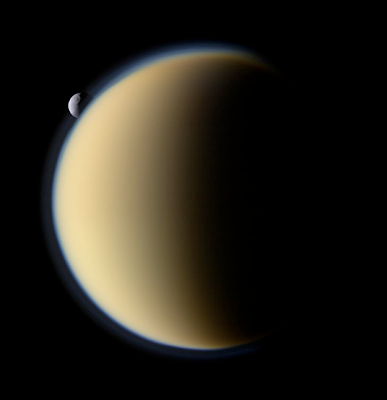 you can see a huge crater on tethys in the image, and you can clearly see one of the most intriguing features of titan: the dense atmosphere that surrounds it! titan is the only satellite in our solar system known to have such a substantial atmosphere which places it on the top of the list of candidates to host some sort of microbial extraterrestrial life. there is currently discussion happening about future missions to explore titan more closely.

mike brown (aka - pluto killer!) wrote a great description of his team's discovery of some storms in titan's atmosphere.

you can watch a video of the entire occultation shown in the image above, or you can learn more about saturn from the sixty symbols video!