my favorite is a beautiful photo by steve irvine that shows "about one hour of firefly activity near my home in rural Ontario. The precision of the background star trails is an interesting contrast to the chaotic pattern of the firefly flashes." 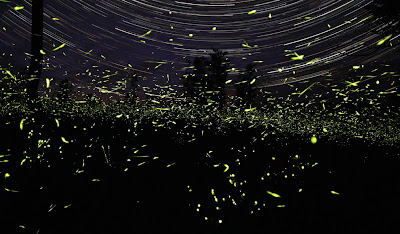 his caption captures the contrasting movements in the picture perfectly.

although... i've always called those little flying creatures that periodically light up in neon yellow: lightning bugs. as far as i can tell, fireflies and lightning bugs are the same bugs, and i'm wondering just how regional these terms are.

what do you call them and where are you from? have you heard both names?

i dont remember hearing the term "fireflies" until i moved to austin, texas. even after i heard the word, it took me a while to identify the glowing creature as my lightning bug, because there arent very many flying around austin! i was used to massive hoards of the creatures, and hadnt even realized that i hadnt experienced the mesmerizing feeling of being inside a cloud lightning bugs since i moved away from home!

where i grew up in ohio, there are TONS of lightning bugs! i usually found lightning bug clouds surrounding bushes or around a grove of trees. the last place i lived before moving away from ohio was a small, square building that held 4 apartments. around the back sat a small parking lot shaded by many tall trees that grew along a small creek. the location felt quaint, welcomed the seasons well, attracted loads of pesky mosquitoes, but also harvested lightning bug fiestas!! during certain nights, i could walk around the parking lot and be completely surrounded by little, moving, disorienting, flashing lights that reached all the way up into the trees!

of course as a kid, i would catch a lightning bug in my hands, watch the neon shine thru my fingers, and wonder why i didnt have the cool ability to light up any of my body parts in such a way!

i havent experienced lightning bugs in such a way anywhere else i've been, except for a hint of the feeling on a boat trip down a river deep in malaysia.... even there, people called them fireflies!

I grew up in North Dakota and always called them lightning bugs, but when I met my future husband, who grew up in Minnesota, he had never heard of of the term "lightning bugs" and thought I was much mistaken for not calling them fireflies!

I grew up in Virginia/DC and called them lightning bugs. I guess I had heard of fireflies but never really thought about it being the same thing, since no one ever pointed at one and said firefly. And yes, there are way more in Va than in TX. I used to catch them and put them in a cup to make a flashlight. (Later to be released of course.) But the neighborhood boys would rip their butts off while lit - they stay lit even when detached.

I grew up in the Chicago and it's 'burbs and we called 'em fireflies. That's also what my cousins in Wisconsin called 'em. My experience is the opposite of yours, though, because when I moved to Austin, TX, that's where I heard them called lightning bugs. Maybe that just reflects the complaint of the old timers here that us Yankees and Californians are the reason Austin "ain't what it used to be"!

Amydove, I had to laugh--we did the same thing, putting them in a jar to make a flashlight! Even though I was a boy, it never occurred to me to tear their butts off. (Gross, but interesting that they stayed lit.) There did seem to be more of them up North, though.

I am from southern parts of India, and till today I have known them only as fireflies.

Growing up in Minnesota, I learned to call them fireflies. I don't remember where I first heard the term lightning bug.

I'm also from the Chicagoland area, and I always called them lightning bugs.

We had a book growing up, some kind of children's story, where they were called fireflies, and that's the only place I've ever really heard them called that.

the few british people i've asked have only heard of fireflies.

The amazing image of the Fireflies was one of my top favorites in the Nat Geo 25 also.

never been in this part of the world but they seem like lightning bugs to me. I saw something similar here and did not know what to make of it:
http://www.viewbug.com/photo/438109

I'm from Tennessee, and I've always heard them called Lightning bugs. When I did hear the name Firefly, I thought it was a beautiful name for a beautiful, yet commonly tortured, creature and started calling them Fireflies ^__^

I grew up in southwestern PA and we always called them lightning bugs.
Fireflies, sounds much more romantic and dreamy by lightning bug is a term close to my heart.

Hello Amanda
The term Lightning bug was not used in Northern Ont Canada where I grew up.We called them fireflies.
Where I live now in West Central Alberta they are also called fireflies.Though not as plentiful as in Northern Ontario.
This pic is sheer beauty!
The photographer who took this pic is a member of http://skynewsmagazine.proboards.com/index.cgi of which I am also a member.He has other very nice pics on his on his website which is http://www.steveirvine.com/astro/
Well Worth the visit.

I grew up in Pennsylvania and knew then as both lightning bugs and fire flies. I now live in Georgia and don’t see them as much anymore; I don’t know if this is just a regional bug or not but I do miss them.

I've spent my life in North Dakota and have never heard the term "lighting bug" used at all! According to a book I am reading on the subject, "lighting bug" is the southern term, "firefly" the northern.