here's an excellent scene from the abstruse goose comic series! 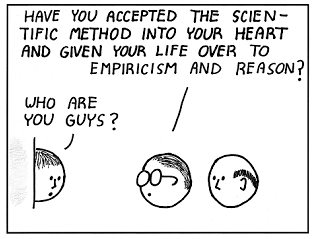 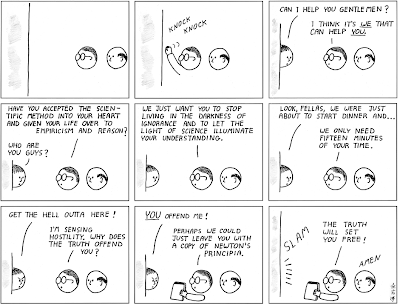 it's tough to tell if the comic is mocking religious folks or scientists? or both? come to think of it, i've never had someone come to my door trying to convert me to their religion in any country other than the US. does this phenomenon occur in other countries?

in my opinion, the comic makes fun of any fundamentalist view and the people who feel they need to convert everyone else to believe whatever they do. anyone can believe whatever they want... i only get annoyed and angry when people hurt others because of differing beliefs, or force their opinions and beliefs on others.


ps. in no way am i trying to relate science to religion here.

Cracks me right the hell up.

The door-to-door converters do it only to broaden the donation pool. Of course that's not what they tell their foot soldiers.

Had a bunch (Jehovah's Witnesses, I think) on my doorstep just before Easter. I didn't answer the door the first time but looked out and saw who they were and that one had made a mark on a list while looking at my house number so I got ready. When they came back later I had a copy of Richard Dawkins' Selfish Gene in hand as I opened the door. Very firm "no, definitely not" reply while waving that got the message over, I think.

The cartoonist is not mocking scientists because he knows that they don't proselytize--not door-to-door or anywhere else. The only minds they seek to convince are those of their peers in review. There is no "equivalency" between science and religion and the so-called "debate" is just church basement theatre.

I've had people come to my door once or twice in Canada. I often see people in the public transit system handing out literature (though it seems to be "The Watchtower" rather than Chick tracts), and I do see a certain number of young Mormons here as missionaries.

I actually wonder about those last. I know going out to do missionary work is a rite of passage, in the literal sense, for some Mormons, but Montreal has had a reputation ever since its nickname was "Sin City" and Americans came up here to drink during Prohibition. It still has a partly deserved reputation for lax marijuana laws, low drinking age, and ubiquitous strip clubs. So I wonder what effect sending young Mormons here has - does turn them onto worldly pleasures? Does it turn them on to the pleasures of looking down on sinners? Does it make home feel safe and sane by comparison?


P.S. Don't let me give you the wrong picture: Montreal is appealing for its multiculturalism, wonderful dining, four excellent universities, and many festivals. I just don't imagine those are what make people decide to send missionaries here. Maybe I'm being unfair.