NASA's atlantis shuttle sits in wait as the crew prepares to go to the hubble space telescope for the final servicing mission (SM4)! launch is scheduled for 2:01 p.m. EDT on Monday, May 11, 2009!! 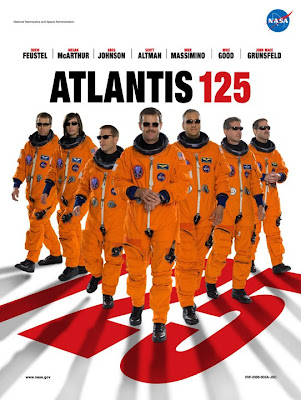 to gain insight as to what astronauts do during the days before a missions, you can follow astronaut mike massimino on twitter! people seem to love or hate twitter, but i've found his posts very interesting because he's described the activities he and the crew have done since going into quarantine about 4 days ago. they are getting prepared for the strange sleeping pattern they will endure during the mission so their quarters are now blasted with really bright light to help them wake up!

you might recall that SM4 was canceled in 2004, which was met by a loud public outcry and the beginning of a petition to save the hubble. i remember being a graduate student in shock at the announcement, but then i was thrilled to see how strongly people responded since the telescope has made such a huge impact in our visions of the universe! in 2006, the high-ups in NASA announced that SM4 had been added back to the launch schedule, much to the relief of many people all over the world!

this mission will last for 11 days. during that time, the astronauts will make 5 spacewalks in order to fix two instruments, install two new instruments and tidy things up so that hubble will function until 2014 (if all goes well).

I've been following Mike on twitter too - very interesting. He says he's going to try to twitter from space - I hope that works!

Of course I am excited too, but I have to confess that I am also very very nervous. I might develop an ulcer next week while we wait to see how the repairs turn out.