a question of consciousness

i wonder about the distinctly human quirk of consciousness. on earth, humans are the only creatures (as far as we can tell) who have developed the ability to recognize consciousness and contemplate existence. (i think we would live very different lives on this planet had we been competing with another intelligent species all along, in addition to ourselves and each other.) many animals share our five senses and even though the details vary greatly, only humans have developed the capacity to reflect on consciousness, invent written languages, and think deeply about things that are not directly related to our daily survival. 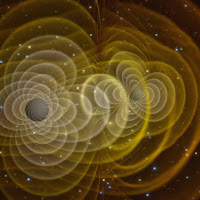 what about life on other planets (which surely exists)? does biological evolution always create consciousness after some period of time? maybe other life forms have seven senses or breathe primarily nitrogen, but if they've developed intelligence as we've come to know it, surely they have thought about science and psychology. my presumption is that the fundamental laws of physics we've discovered would be the same for these life forms. even if no creatures in the universe fully understand the fundamental laws, as we certainly don't, the laws should be equivalent. gravity would behave in the same, inescapable, familiar way that the force between the life form and its planet would decrease by the square of the distance between the life form on the surface and the center of the planet. this seems reasonable to me... but what about consciousness? is it always the same?

just as animals on earth have no concept of cognitive awareness, is there an equivalent level of something that we humans have not evolved to be able to feel/think/recognize/attain/comprehend? i try to think of emotions that could exist that humans have not experienced, but my list of possibilities (empathy, love, fear, depression, anger, etc...) seems as comprehensive as i can contemplate! will our human creation of potentially conscious robots give us more insight to the possibilities?

i mean, i'm not really looking to further complicate my humanoid life with even more concepts that i don't understand... but its fun for this feeling, loving, learning, creating, evolving, intelligent, bipedal, earth-bound, carbon-based, biological, talking collection of atoms to contemplate such circumstances!


these thoughts developed today as i watched the following video from the march 2007 TED talk by the 1969 Nobel Prize winner in physics, murray gell-mann. his talk is titled: beauty and truth in physics.

Two stories of creation, told from two points of view.

Creation by God is the only scientific and reasonable and believable method of world creation.

Interesting. Why does consciousness have to be linked to an emotional response to stimuli though? Human beings have begun to value the idea of rationality almost above the value of emotional responses as emotions can be irrational and illogical, hence the idea of scientific method being seen as absolute truth.

I think in some ways our consciousness is dictated by that which we are concsious of, ie things we can sense. perhaps more senses or a deeper understanding of our senses would trigger advances in consciousness in a similar way that our questioning of the universe around us has broadened the consciousness of humankind to the extent where we are now tasked with saving the planet from the follies of our past. i do not think we as a species have even scratched the surface of what we are capable of with our minds, and therefore what our consciousness can comprehend.

A more evolved being could look at us the way we sometimes look at animals and say something like, ahh those poor little critters have not yet got the ability to understand and manipulate matter with the mere power of consciouss effort, what a pain life must be for them.

Many animals have a different perspective than us due to the power of their senses and indeed some animals such as dolphins(who have brains of a similar size to our own allough each area is proportioned differently), even have the added sense of echolocation. it is thought by some that dolphins can use this sense to detect emotions such as anxiety in eachother by looking inside eachother and seeing tense muscles and reading peristaltic motion as stress identifiers, you cant hide anything from a dolphin, imagine what that ability would do to your consciousness!!!!!