during my first night in Beijing, i managed to entertain some locals by eating something completely the wrong way. but i'll get to that...

the Donghuamen Night Market in Beijing, China is known for its unusual food options. this market is a bit overpriced and caters to the tourists, but you can bargain for deals if you want. in general, the strangeness of the options makes up for the overall blandness of the flavours, in my mind.

for instance, in the image below you see silk worm at the lower left, and snakes on sticks in the middle of the upper row! 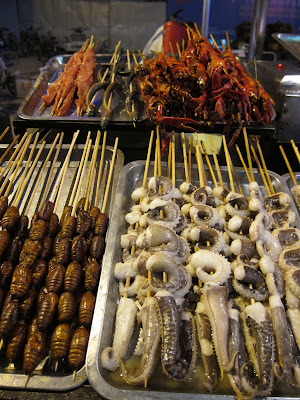 you choose what you want and they either fry it or grill it over the coals in front of them, as this woman has done to the skewered snake she's happily handing off. 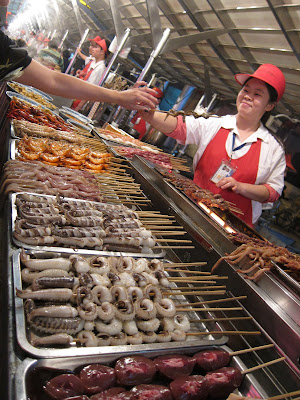 i did not eat snake.

i have no idea what the mound of thing below is. i couldnt guess from the items listed on their signs and they couldnt tell me when i asked. they chop it up and serve it in a stir fry or a soup. the locals seemed to like it. 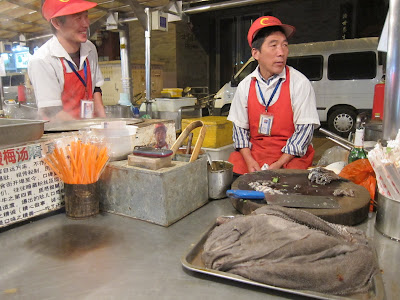 then, of course, there are the creepy crawly things: scorpions, centipedes, grasshoppers, lizards, massive crickets, etc... all deep fried to order. 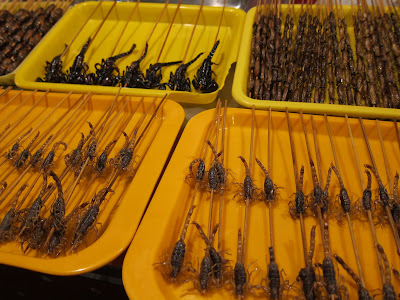 i did not eat anything with too many legs to count, nor did i eat or photograph the sheep's penis, the (seriously) stinky tofu, the pig ears (a true delicacy here), the testicles, you get the idea.

what i did eat were squid, oysters, dumplings, and a starfish! 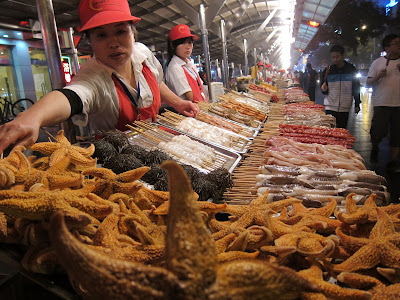 a guy at the stall offered to take my photo, and my expression mostly describes the experience. i wanted to like it, but... 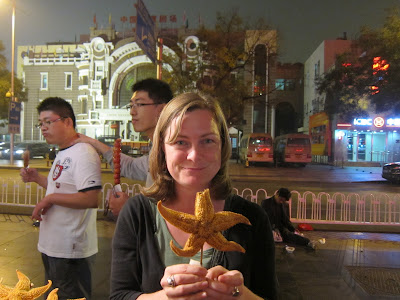 it had a very confusing and gritty texture. i didnt really like it at all. i took one more apprehensive bite as i walked along the stalls and was about to toss the awful thing in a bin, when an old lady mercifully waved me over to her stall and showed me the proper way to eat a starfish (between her fits of laughter with her friend)!!

apparently youre supposed to crack it open and only eat the dark flesh inside! 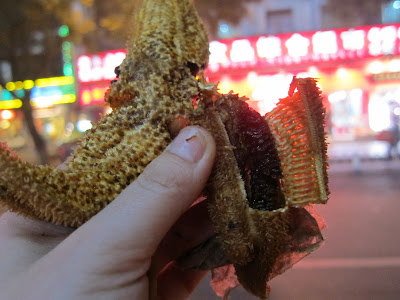 oops! i was completely embarrassed, but happy to learn the right part to eat! doing my best as a silly westerner to entertain the locals ;) the inside bit was definitely better, but kinda bitter and salty and not actually that tasty. a woman stopped just then and asked if i could give her some money to buy bread. i offered her the rest of the starfish, but she refused, and turned quickly to rush away. hmm.

i ended the evening on a sweet note, with fruit glazed in sugar! 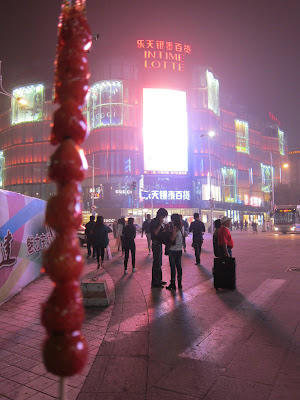 My grandmother didn't like the banana until she found out it should be peeled.

Some of that looks like it could be added to my W00tstock talk...

MMMMMMMMM starfish! Yummy Amanda!
At least Soylent Green is not on the menu (YET? ) ;)
Peace and clear skies!
7718

Ah, I remember Donghuamen market, but I wasn't brave enough to try starfish! Pig's ears are available in Ashfield, but I'm happy to have not seen sheep's penis!

The food that builds all the world's stuff. Since scorpions are probably my soulmates, eating those would be like cannibalism.