this year i decided not to have a birthday cake and instead made birthday brownies in oranges! i first got the idea from the cooking for geeks book that i won for the pluto video at dotAstronomy last month! i combined this with a slightly modified version of a brownie recipe from a moosewood cookbook... and voila! 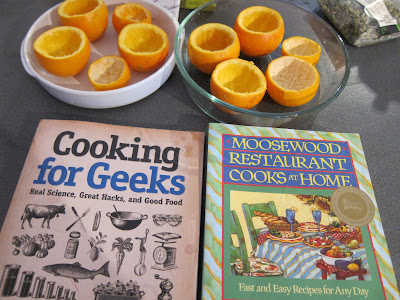 to do this, chop the tops off of several oranges, cut around the edges and scoop out the insides. i used some full sized oranges and cut along the edge where the pulp meets the pith (the white parts), then cut two diagonals along the center and scooped out the edible stuff with a spoon. the juices resulted in a fabulous glass of oranges juice, but the few easy-peel oranges i used were much easier to gut.

make your favorite brownie recipe, or brownie mix from a box, and fill up each orange skin to within 1 centimeter from the top. 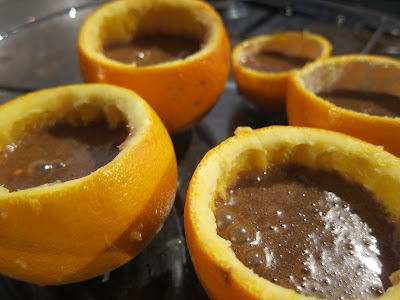 place in baking sheets and bake at ~350 degrees fahrenheit (~165 degrees celcius) for ~30 minutes or until a toothpick comes out of the center clean. i ended up cooking mine for almost an hour which worried me, but they ended up tasting fine and quite fudge-like throughout!

definitely keep some of the pulp inside the orange peel if possible because it keeps the brownies moist and tasting of orange! when we arrived home from dinner, the whole place smelled of chocolate oranges. yum! 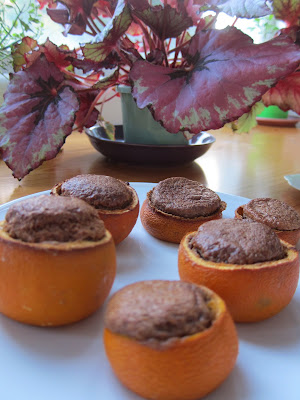 Hi Amanda
Looks Good!
My daughter while in Girl Guides of Canada did something similar but put the top of the orange back on and wrapped them in wet newspapers then tinfoil and cooked them on a grill over a glowing coal campfire.We made them many times again when camping (tenting) with our children.They were very good.
Peace and Clear Skies!
7718