determining how far away an object in the universe is from the earth is one of the most difficult tasks astronomers face, and also one of the most important. because the light from distant objects is the only signal we know how to receive from them with current technologies, we need to know how far away they are in order to determine how intrinsically bright they are. once we know that fundamental piece of information we can start to deduce all sorts of funky and interesting information about them!

there is a series of ways that astronomers use to determine distances to celestial objects, which is described as the "cosmic distance ladder." if an object is sufficiently far away (more than a few million light years - a criterion satisfied by all galaxies in the universe except andromeda and the little guys in our local group), we can measure its redshift. the cosmological redshift is a measure of how much a wavelength of light from a distant galaxy has stretched due to the expansion of the universe since the galaxy's stars emitted the light that is finally now reaching earth. whew! go read THIS for an explanation of redshift if you want...

in order to determine a solid redshift, you have to know how far light from a galaxy has shifted in wavelength. the best way to do this is to look at the galaxy's spectrum to identify specific spectral features (e.g. hydrogen, oxygen, etc...) whose patterns are all shifted to longer wavelengths. when i was at the telescope last week, we were observing spectra of 400 galaxies an hour (in clear weather) and then determining their redshifts as we went. here are some examples of the practice in action...

someone in the collaboration expanded a fancy little bit of code that shows the galaxy spectrum (in white) and allows one to display template spectra of well-known galaxy types (green) shifted to the potential redshift of the observed galaxy. (click image to enlarge). the X axis (horizontal) shows the wavelength scale (the discrete energies of the photons received by the telescope) and the Y axis (vertical) shows the amount of photons received at each of those discrete wavelengths.

to determine the exact redshift, you match as many features as you can, like the overall shape of the spectrum, the well-known dips (like calcium H and K that are very close to each other at about 4500 angstroms in the above spectrum), or the more obvious spikes ("emission lines"), if you happen to get strong ones like in the example below.

some galaxies have spectral features that are very strong and easy to identify, but others look noisy and its not obvious at all if there are any features. to be absolutely sure of a redshift, we can take a guess at the redshift and then look more closely at several regions where there should be spectral features if they are present in the galaxy and if the galaxy is at the guessed redshift. 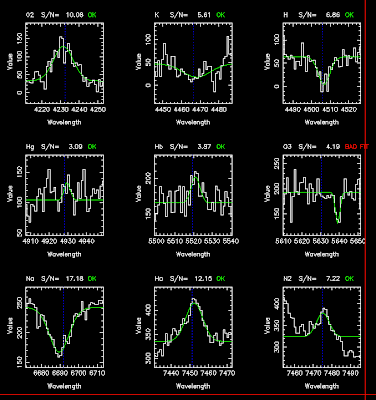 its amazing to sit back and think that each one of these spectra are composite collections of light created by hundreds of billions of stars gravitationally bound together in a single swirling galaxy, probably not unlike our own milky way home. but i have to admit, when every singe hour of observations produces a collection of 400 galaxy spectra to determine redshifts for, my eyes feel exhausted and strained at the end of a long night at the telescope!

luckily during our recent observing run, we had quite a few people in the telescope dome (note the unusually high female to male ratio :) 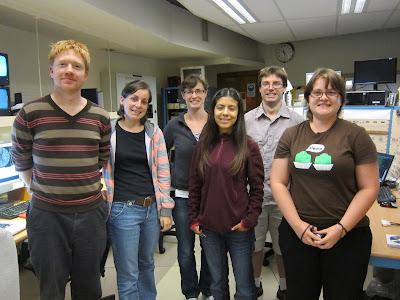 and we could therefore be a bit more leisurely during our redshifting sessions!! 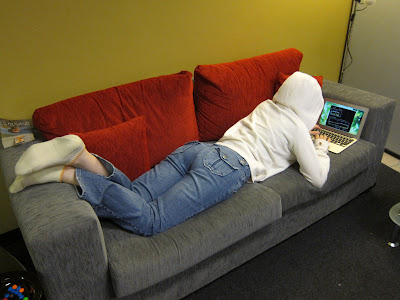 Looks like fun!
I can relate to the data analysis as I am also a Vibration Analyst (Level 2)(Get a few chuckles over that job description)and have collected and analyzed data to look for mechanical defects in machinery.
The graphs look similar although the parameters are different.
Watching the Stardust NExT date with a comet flyby right now on NASA TV.
Hoping for a good show at Tempel 1.

That was an extremely confusing part of organic chemistry that we never figured out. It's just noise with 1 piece of noise that's an H2O group. Always wondered what amazement the A students got out of it.

US is definitely not the place to find heroine astronomers, but they're all grad students in the photo. How many Ozzies keep working during the peak marriage years?

no, heroineworshipper, they are not all grad students in the photo. among the females: 2 are post-docs one is just finishing her phd and has a prestigious post-doc lined up, and one is an undergrad. not sure why you are making such assumptions....

as for your question, i have no idea what you consider "peak marriage years."

You're doing it all wrong! It is much better to measure the stellar velocity dispersion, size and luminosity and then one can infer their distance using the galaxy fundamental plane.