i've been working for the anglo australian observatory out of the sydney offices since november 2010 and today i finally get to drive out to the observatory and meet some new big telescopes! for the next four nights and several more later this month, i will be learning to use the anglo-australian telescope (AAT).

in this photo from 1979 you can see the AAT and star trails around the southern celestial pole. you can also see squiggly lines on the catwalk around the telescope created by the flashlight of an astronomer checking the weather during this long exposure... 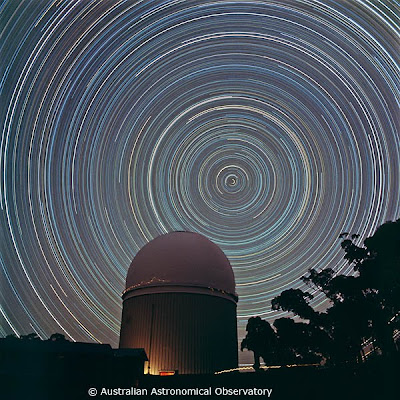 with a 4 meter diameter primary mirror, the AAT is no longer one of the largest telescopes on the surface of the earth, but it has remained an astronomical work horse since the mid 1970s, when it was built as the first major telescope in the southern hemisphere.

for a nice little video summary of some of the most influential science discoveries produced by the AAT, CLICK HERE!! the project they mention near the end of the video, called GAMA, is the one i'm working on. hopefully, i'll get to write more this week about what i'm doing at the telescope and the research i'm doing in australia and with GAMA.

for now... its time to drive over 7 hours to the northwest to reach the observatory. we're currently sitting under heavy clouds, but even after driving 400 km north, we'll be decently far away from last night's intense cyclone yasi. as you can see on this map, yasi hit in northern queensland, while the observatory sits solidly in new south wales. sending out good thoughts to those suffering from yasi and other flooding around queensland!

so it's Feb. 3 already in your part of the world? :) that never ceases to amaze me.
Cheers and sorry for being off topic.

Glad that you weren't caught up in any of the weather..! Will check the links and be summarily awed and humbled!