the last eclipse of 2009 will occur on new years eve! everyone around the world will see a full moon that night, and it will be a blue moon - the second full moon occurring in a month. look to the east, in the constellation gemini. 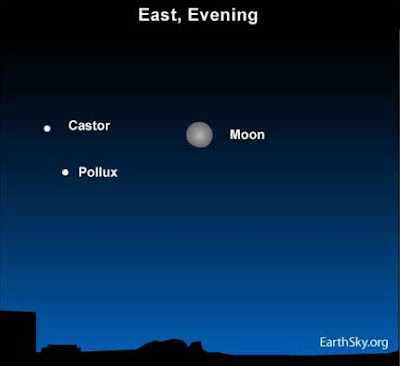 on new years eve, the earth will float almost directly between the sun and the moon, causing a partial lunar eclipse. the greatest eclipse occurs at 19:23 UT, when the edge of the moon passes thru the earth's shadow. this eclipse will be visible to people in europe, africa, asia, india, and some of australia - too bad americas! but you will have this view during the first few nights of 2010, as the moon passes close by mars on january 2nd! 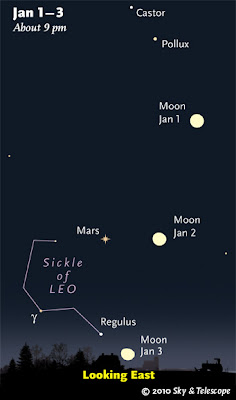 the above map comes from sky and telescope, who state that "the Moon is plotted for North America; in Europe, move each Moon symbol a quarter for the way toward the one for the previous date."

"on new years eve, the sun will float almost directly between the sun and the moon" thats gonna be a cool trick :D

This will give you more of the science of lunar eclipses

the science was never in question, I was being a tad cheeky (ok a lot) pointing out that the sun would have problems placing itself between itself and the moon. I could have just pointed out that earth had been misspelt as sun. That'll teach me to try and be smart.

i must have read that sentence 10 times before i realized something was wrong. proofreading fail.