i tried to figure out how to benefit from using google wave, in fact, it was one of my goals while attending the dotAstronomy workshop last week in leiden. day three of the conference was "hack day," which had no official sessions planned so that people could team up to create absolutely whatever they wanted, and seemed like a good day to test google wave.... somehow. 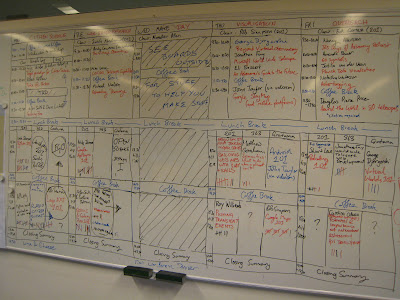 this day could have been a major disaster considering the lack of structure, but the enthusiasm of the conference participants generated a fun atmosphere of impressively creative productivity! it really amazed me to watch so many people working together in such efficient collaborations.

markus possel spent his day learning how to use some new editing software to make the dot astronomy trailer. that's him on the right: 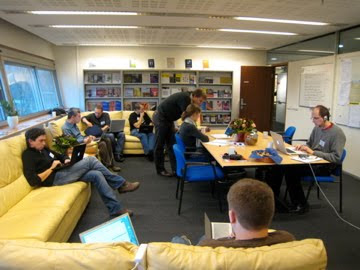 pamela gay interviewed many people (including chris lintott seen here) to get material for her popular astronomy-related podcast: astronomy cast. 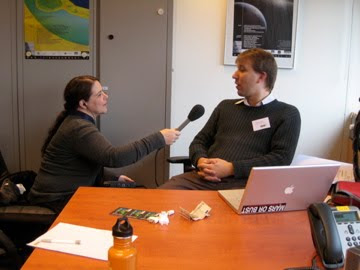 i assume stuart was doing something here with the jodcast, but i couldnt keep up with all the projects he was working on! (photo by nancy a) 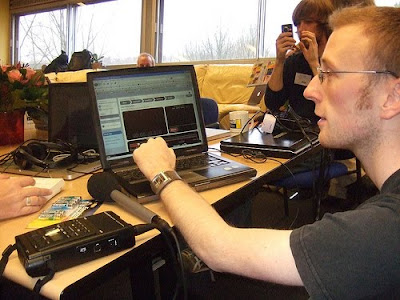 the night before hack day a group of us went to a pub and came up with a fun idea for a project we could actually do on hack day (details to come...)! NOTE: many good ideas come while sitting in a pub. during the morning of the hack day, we accreted more volunteers for our project and discussed the details. (photo by robert hollow) 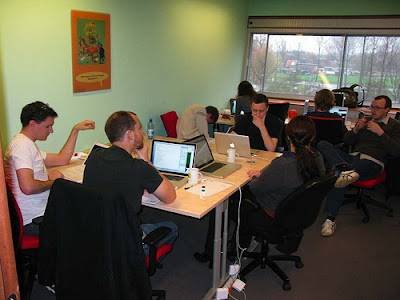 the people with the technical skills quickly decided who could do what, and set about designing the components that would add together to make everything work. i realized that my normally sufficient nerdy knowledge was failing me, as i only understood bits and pieces of what they were saying. 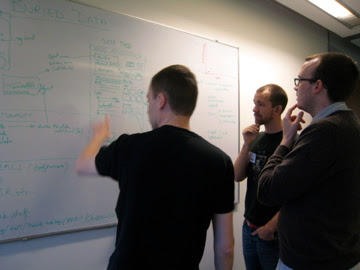 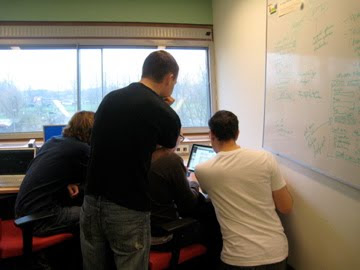 i decided to share the responsibility of writing the text for the webpage, which allowed the opportunity to test out google wave! i sat in a room with chris, sarah, and michael, started a wave, and away we went. 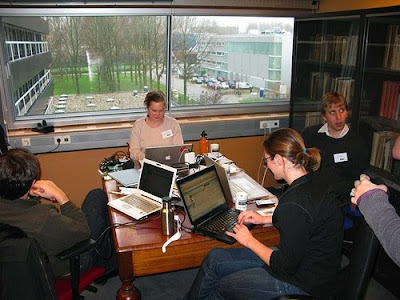 we found wave beneficial for a little while. the interactive text was nice, as one person could be dictating an idea while watching the words change on the screen as someone else wrote. but then it got really slow and kept freezing at times, causing me to lose some work.

we eventually gave up on google wave and announced on twitter (as was customary at .Astronomy) that we were switching to EtherPad. i really liked the EtherPad set up more, because you could highlight each individual's edits in different colors, and there was a chat window next to the text file which would have been extremely useful had we not all been sitting in the same room together. 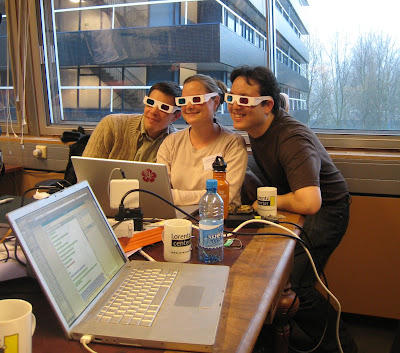 oddly enough, the very next day, we received word that google had bought EtherPad! i was not happy about that. then the next day, the announcement came that ether pad was back online and would be open sourced. um, ok. i'm still involved in some waves, but mostly because i like the projects that are using a wave to communicate, not because i'm a wave fan.

anyway, the main point of all this is that while i dont fully understand google wave, i have MANY many wave invites to share. so if you want one, let me know in the comments! also, congratulations to all who participated in the successful hack day and thank you to those who taught me new things and made the day so exciting and fun!

Just a quick note on Wave: Right now, it's pre-beta. I've used it, but no, it's definitely not ready for prime-time. I think, as you saw, it has a lot of promise, but there's a lot of work yet to be done.

Really enjoyed your posts from .dotastronomy! Thanks so much for what you do to keep us all up to date!

I have google wave but have yet to actually use it for anything. Maybe it's one of those things that i will one day find some specific use for.

Oh could I PLEASE have an invite to the wave? I have subscribed for one...but no luck yet.
PS...LOVE your blog!

Funny Goog invests so much in electronic collaboration yet still requires employees to show up in Mountain View in person.

@heroineworshipper: actually they have campuses in a number of places, and data centers in even more. They use teleconferencing and similar things constantly to keep in touch.

Speaking of which, it occurs to me that google wave might be a good tool for a task that I've run into a fair number of times so far: showing people (or being shown) how to run observations. Usually we share a VNC session and run a skype window, but google wave ought to allow the conversations to turn directly into a document I could then start from to explain to other people. So, uh, if you still have some invites, I wouldn't mind one. Thanks!

anne - email me your email address and i'll send you an invite!