i have to brag a bit about a good graduate school friend of mine, robert quimby. not only was he the first of our class to graduate (thus making the rest of us look bad), but he was the first (and only so far that i know of) to be mentioned by name in the New York Times (thus making us all very proud)!! 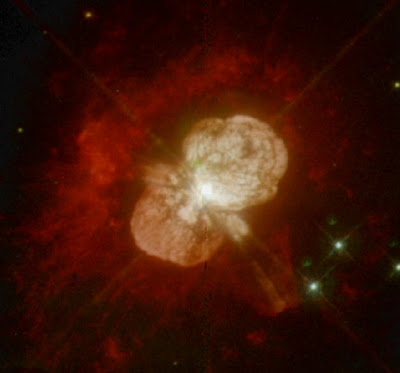 Robert got involved with a cool project at McDonald Observatory using a relatively tiny 18-inch telescope. using nifty software that robert developed, the telescope automatically scans galaxy clusters for signs of change... explosions indicative of stellar deaths called "supernova"! when he wakes up in the morning he looks for these new spots in his images. he's so dedicated to this project that he has his cell phone set up to ring every time a new supernova is discovered! hahaha! i used to make fun of him for that, but i secretly thought it was pretty cool (uh-oh... now the truth is out!)!

the big news revealed yesterday is that Dr. Quimby discovered a very interesting explosion last september while he was deep in the haze of writing his phd dissertation. his collaborator's follow-up observations revealed that they dont really know what caused this explosion to happen! it's 100 times more powerful and has lasted longer than any other supernova explosion resulting from stellar death ever seen!

what's even cooler is that i have all kinds of pictures of the doctor to reveal to the public! bwah ha ha ha!!! dont let him fool you here... astronomers dont drink no stinking water! 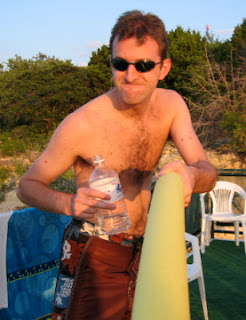 here he is with my adoring little sister. another little-known fact is that he used to be in the band reel big fish way back in the day... which is my little sisters alltime favorite band. she got so mad at me the first time she came to visit and i didnt introduce her to robert. so here's their meeting... in all its glory (water again!?)! 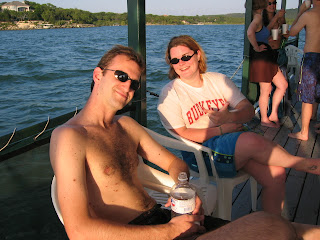 from our first astronomy meeting together... awe....