i caught myself staring at this image of the 2009 total solar eclipse that was skillfully put together by miloslav druckmuller and crew. 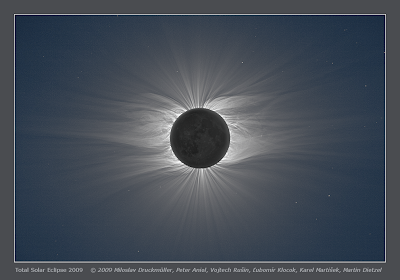 to create the image, they stacked 38 individual images together and captured the fine structure of the sun's white corona, a far-reaching layer of the sun that we rarely get the chance to study because it is hugely out-shined by the blinding photosphere - except during a total eclipse.

it amazes me just how far out the corona reaches - at least three times the width of the sun away.  and its light flickers and changes as super-heated hydrogen bubbles up through the layers of the sun to be released into space, if it escapes the traps of the rolling magnetic fields.

there exists an interesting mystery about our sun's corona.   while the regular surface of the sun, the bright yellow bit hidden by the moon in the image above, has a temperature of about 6000 degrees celsius, the corona reaches a temperature of over one million!  no one really knows how this happens, although "magnetic braids" might give a clue.

we can see evidence of the sun's strong magnetic activity all the time. using specially-designed telescopes, we see solar flares, prominences and other activity happening closer to the sun's surface. 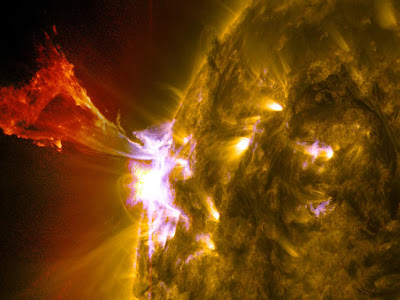 to gain a feel for the size of our star - you can fit one hundred earths across the middle of the sun. 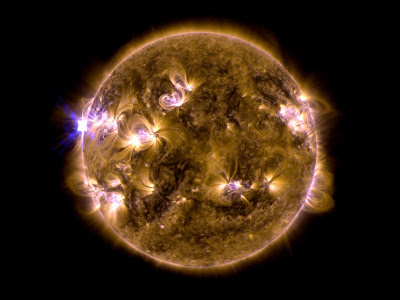 this last photo is a still from the movie of the "tree of avatar" solar flare - well worth a watch. 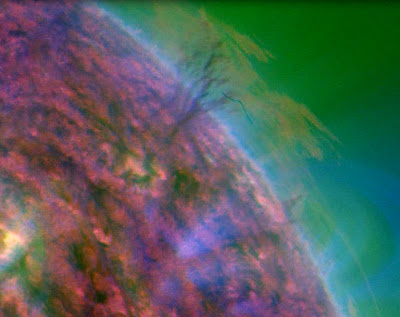 the surface of the sun appears alive with activity.  every normal star out there in the universe also experiences these surface bursts and flares, but we cannot study them in as much detail because the stars are so far away.

this realization makes me appreciate the work of the planets hunters, both professional and citizen scientists, even more.   not only do they have to measure a miniscule dip in the light from the star because a planet passes in front of it and blocks it, but they have to try to be sure that the light dip isnt caused by normal stellar surface activity, nearly impossible to resolve at such large distances.

despite the recent end of the kepler space telescope's lifespan collecting data of potential planets around distant stars, there is much astronomers have yet to learn from the telescope's plentiful archive.

as of today, we have found between 719 and 889 exoplanets.   i'm sure more and more will be revealed as the kepler data is explored.  exciting times!

I thought they solved the "hotter corona" mystery? Isn't it hotter due to being heated by jets of gas from the surface?