the wambelong fire passed through siding spring observatory and the surrounding warrumbungle national park during the last week.  the threatening fires are mostly out now thanks for some rain falling over the weekend.  there will be updates today as i put together the news from the weekend and the safety inspection occurs as site.

in the meantime, you can read a personal story of the events by rob mcnaught, a prolific discoverer of comets and asteroids using small-ish telescopes on siding spring.

here is a time-lapse movie taken from the home of one the AAT's telescope operators (edward pigot seismic observatory - www.map.id.au/seismic).  the movie shows 24 hours in 3 minutes from 5 km east of coonabarabran.   he says "Lightning strikes the night before had started small fires within the park, which flared into a major firestorm by mid-afternoon. A wind change brought the smoke plume overhead EPSO around 4pm, and during the night firelight reflected strongly in low cloud and smoke."  watch on the right side of the shots...


UPDATE (12:45): several times during my drives to siding spring observatory over the past two rainy years, i've heard many visiting astronomers comment that "the warrumbungles look more lush and green than i've ever seen!"  from my time in australia i've realized that weather patterns here are extreme, and they last for years.  there will be 5 years of intense drought followed by a few years of very rainy summers and every combination of everything in between.

last year summer in sydney was a huge disappointment - rainy and cold the entire time with few of the stunningly wonderful sunny weekends to enjoy the beach like we've had this year.

so yes, the warrumbungle national park near coonabarabran was known to have an excess of low level brush that increased the potential danger of bushfire damage.   that is why controlled fires were burnt throughout the spring and warnings of bushfire danger were spread throughout the region as the summer was proving particularly sunny, dry and hot.

i write this in order to build the contrast between this photo i took from the top of the AAT dome in march 2012 (the foreground buildings are the director's cottage and the astronomers lodge - both destroyed in the fires.   the distant hill is speckled with telescopes, including skymapper and the 2.3m square building): 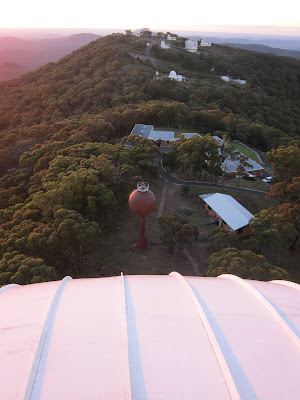 and these photos sent to me by AAT guru steve lee, showing the view along timor road that connects the observatory to coonabarabran.   as steve says, "The trees in the pictures look very peculiar in that they seem to have leaves on them, despite being completely burnt. These were ones where the fire wasn't so complete in destroying the tree. Spooky albino leaves. They'll drop off eventually."


53 families have lost their homes in the area as a result of these fires.  the sydney observatory crew sent up a couple cars full of clothes, food, tools, and other supplies today in hope of helping out.   others can donate to the:  Warrumbungle Shire Mayor's Bushfire Appeal.

i'll update with information about today's safety inspection and the status of the telescopes as soon as i get it.

UPDATE (20:30):   site testing happened today at siding spring observatory.   this included checking for asbestos, which was still in some of the buildings that burned down.   they also took air samples and tested the soil for traces of other hazardous material, such as benzene, that may have been emitted from burning plastics, etc.