some points of interest from day 2 of the supernovae and their host galaxies conference being held here in sydney this week....

Alicia Soderberg talked about the necessity to observe supernovae at radio wavelengths, in addition to the traditional optical spectral follow-up. radio observations give insight to the elusive progenitor stars and environments in which stars explode. radio emission from supernovae explosions originates from the interaction of the explosive shock wave with surrounding materials. a high radio flux indicates either the presence of dense interstellar material, or material present or stellar winds from a nearby "donor star."

she also acknowledged that "what made the Very Large Array (VLA) move" to the Whirlpool Galaxy (M51) a little less than a month ago, was the announcement by amateur astronomers on Twitter, that a star exploded in the nearby galaxy!

according to alex filippenko, professor of astronomy at the university of california, berkeley, and supernova expert who happened to be at the twin 10-meter Keck telescopes at the time of the twitter announcement,

the very fist picture taken of the SN2011dh is shown below, even though it was not the source of the original announcement. these were taken by Manolo Barco, an amateur astronomer cordoba, spain. 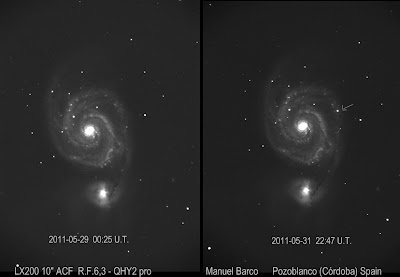 Avishay Gal-Yam finally gave an explanation of the physical descriptions behind the different core-collapse supernova types (i couldnt remember the distinctions from my grad school classes...). Type II supernovae are believed to result from stars that have a helium and a hydrogen shell of surrounding gas before they explode. 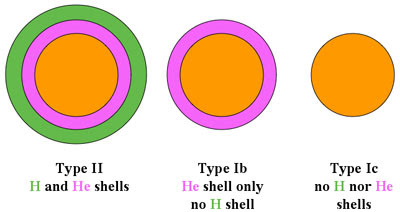 there is also a trend such that as you go to the right in the diagram above, you tend to find those supernovae in galaxies with higher metallicity. Both Gal-Yam and Maryam Modjaz were careful to point out that the metallicity should be measured from the region around the supernovae explosion and not estimated over the full galaxy.

one topic that really interested me was the destruction and production of dust caused by supernova explosions. any dust present in the near vicinity of the star is vaporized by the initial explosion, but then more is formed over time on the molecules formed by the outward moving shock wave. the destruction is also dependent on dust grain size, such that small grains are more easily destroyed in the detonation and therefore large grains (>0.01 microns) survive.

estimations from very distant quasars reveal they should harbour 10^8 solar masses of dust already when the universe was less than a billion years old. in order for that much dust to be present, each supernova needed to produce between 0.1 and 1 solar mass of dust. observations, unfortunately, are not very good yet at constraining these values. based on the line profiles of optical spectra and thermal infrared excess, observations have given values of 0.0001 and 2 solar masses of dust present in supernova remnants!?! tough measurements to make and models to produce. will the herschel space telescope reveal more? time will tell.

... hmm, seems like my point on the previous post was pretty accurate. Amateur astronomers are the ones who 'tweeted' the supernova? Astronomy and physics depend greatly on those who follow and support these fields. Wasn't Albert Einstein a patent clerk..?

of course! whether one does astronomy/physics for a hobby or profession.... let's figure out how the universe works!