the partial solar eclipse that occurred on 4th january 2011 was not visible from my part of the world, unfortunately. but many people achieved some fantastic photos of the event, including this shot featured on APOD today taken in austria by robert pölzl. 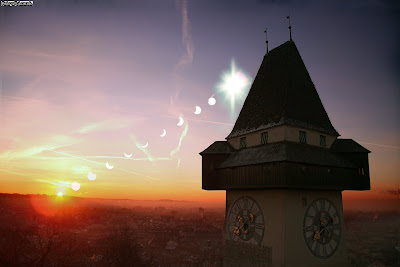 lucky for us earthlings, there will be another 3 partial solar eclipses and 2 total lunar eclipses in 2011! most of them are visible from rather remote places on the globe, but i'm sure some folks will venture to take photos for the rest of us!

the next total solar eclipse takes place on 13th november 2012 and will be visible from the very north of australia! i'll absolutely, positively be there! anyone else?

Invest in a telescope. Hopefully no dust storms or haze as bad as Beijing.