a world cup of crisps

in honor of the world cup next month, a pub near my house is offering sausages from a dozen different countries playing in the tournament. it really made me laugh when i saw the sign, but now i'm curious about what sausages will be featured from various countries like the US, france, and even england. so of course i will be watching at least a few matches there!

i think the sausage variety is a much better idea than the one developed by Walkers crisps (potato chips). they have created 15 new flavours of crisps from different countries in the world cup, including: South African sweet chutney, Spanish chicken paella, Irish stew, American cheeseburger, Japanese chicken teriyaki, etc... 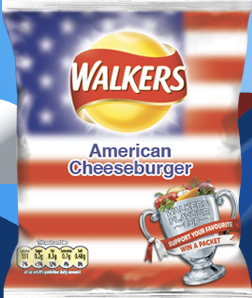 you should read the hilarious results of charlie brooker's taste test.

i mean, the british love their crisps and they certainly have an arsenal of unique and interesting flavours already on the shelves (eg. "prawn cocktail" or "smoky bacon"), but i think maybe this has gone too far....?

It's like a small piece of fried potato failing to recall a repressed abuse memory while sitting on your tongue.


Thought that was a great line. What is the deal with Irish Stew??

Anyone remember Mexican chilli Pringles? And Kelloggs Nut Feast? Also remember when you could get Entennemanns carrot cake in Asda?