wired science has a nice gallery of clouds from space. the image below was taken by the Landsat 7 satellite in September 1999 and shows a pattern known as a von Kármán vortex street. 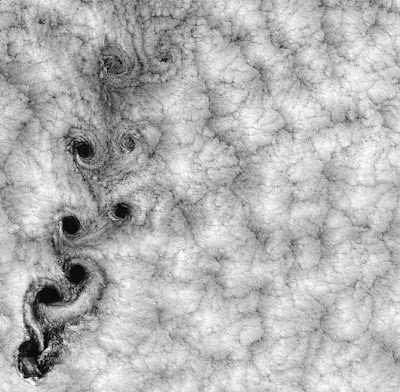 the spiral pattern is caused by processes of fluid dynamics. if you look to the lower left of the image, you see a little island just where the vortices start. as wind blows from the lower left to the upper right, it runs into the island and starts spinning into vortices, which are only visible because the clouds are there.

the same process happens when you stand in the ocean and a receding wave forms vortices as the water rushes past your ankles.