may the fourth be with you

after having a pleasantly productive week last week, i'm heading out of town this week for a couple different adventures.

i'm going to london tomorrow to support a colleague who made the final cut for the Institute of Physics Award for the Very Early Career Woman Physicist of the Year. i wrote her a letter of recommendation and i'm so proud of her achievements, that i'm going to the ceremony they're holding tomorrow to honor the nominees. each "very early career" physicist finalist will give a short talk summarizing their research and there are a few other invited speakers as well.

while in london, i'm hoping to see the Hubble 3D IMAX movie which is only playing in the UK at the science museum. also, happy 20th anniversary to the hubble space telescope! the hubblesite released this image of the carina nebula in honor of the occasion: 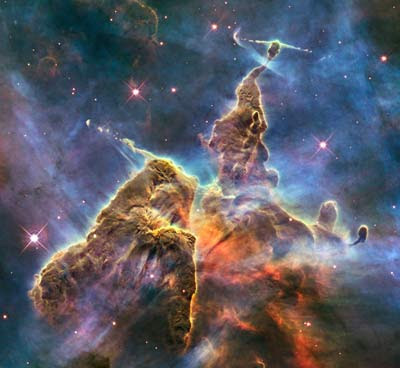 the hubble has taken some amazing images for us - after receiving an eye treatment soon after its launch. i wonder how many of you remember when it was discovered that hubble had a flawed mirror and needed fixing? what was your reaction when you heard the news?

i was twelve or so at the time and remember thinking: oops, that was a big mistake, wasnt it?! i also remember seeing before and after images from the hubble in the newspaper after they fixed it. i was amazed at what a difference there was between the blurry before shot and the crisp, detailed after shot. while i remember feeling slightly embarrassed for the scientists because they had made such a huge mistake when making the original mirror, i was really impressed that they could fix the problem, considering the telescope was already floating in space.

anyway, after the quick 2-day trip to london, i'll leave the next day for a 4-day musical escapade at the ATP festival, curated by matt groening. i think i'm most excited to see daniel johnston live, but there are several great bands playing!

Extra props for reminding me of Daniel Johnston...an astonishing talent with so much heart.

Double extra props for doing it in a post that includes astronomer pr0n =) Carina Nebula ftw!