thanks to the upcoming release of the new robin hood movie (yes, an australian actor is playing mr hood), the month of may is officially "robin hood month" in the fair city of nottingham!

i saw this display in the main window of the downtown library: 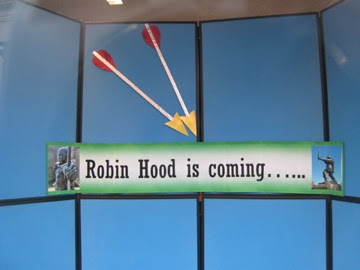 i'll probably go out with some friends in a couple weekends and get dressed up in medieval garb, or at least wear a bunch of green. the challenge will be to make robin hood costumes that dont look too much like peter pan! maybe i'll play it safe and go with maid marian. any suggestions?

How about dressing up as "Maid Marian from the future"? Maybe a robot type outfit?