many things can happen to a galaxy throughout its lifetime. trying to identify, understand, and quantify the underlying physics and resulting appearance of the possible events, in order to describe the huge variety of galaxy shapes we observe in the nearby universe, is what we loosely call the field of galaxy evolution.

most large galaxies merge together with other large galaxies between 2 and 5 times (on average) during their lifetimes. when mergers occur between galaxies of roughly equal mass, we call them "major mergers." we see evidence of galaxies merging together, as shown in the collage below of 6 different merging systems observed with the hubble space telescope. major mergers completely destroy the appearance of both systems as their stars and gas mix up completely and transform into a new single galaxy, having roughly spherical shape. 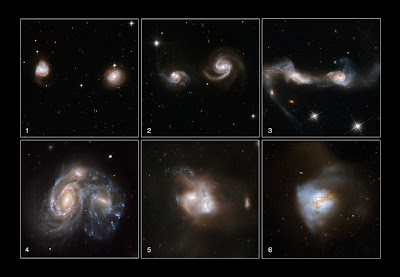 we can only see one snapshot of real merging systems because the timeframe for merging is so long. if you observe any of the above systems in 30 years, they will look nearly identical! but several research groups have been largely successful in simulating galaxy mergers using known physics and powerful computers, so we have a decent understanding of the process of major mergers, even if we don't understand all the details.

but the majority of interactions between galaxies are not major mergers. it is much more common for massive galaxies to be invaded by smaller, orbiting "satellite" galaxies! or for individual galaxies to fall into large clusters of many galaxies, only to be affected by the hot gas that lives between all the galaxies in the cluster. the challenge is that these events are much more difficult to observe with telescopes than major mergers, because less massive galaxies are much fainter, and gas is more challenging to detect than starlight!

at the conference i recently attended in malaysia, there was much discussion about the effects of galaxy interactions... from computer model predictions, to actual evidence as detected by observations of the universe.

i find it interesting that the terms used by professional astronomers to describe the different effects of galaxy interactions are so surprisingly violent! some examples: harassment, strangulation, suffocation, starvation, (ram-pressure) stripping!! not only are these terms violent, but for some reason, astronomers use several different brutal terms to describe the same type of event!?

a clever astronomer, aeree chung, created cute little caricatures of each of these processes to illustrate their definitions, differences and similarities.

according to her pictorial, the image to the left shows a contented, normal, unperturbed, spiral galaxy! the solid yellow portion shows where the stars live, while the blue fuzzy areas show where the galaxy's gas lives. there is a round bulge in the center of the galaxy which is surrounded by a flat disk - just like our milky way galaxy.

the image to the right shows two galaxies of similar mass undergoing a major merger! they are each clearly disturbed the by presence of the other ;) the central bulges of the galaxies dominate the gravitational potentials and are quickly pulled toward each other while the stars and gas in the disk are stretched out to great distances at the beginning of their encounter (close to image 3 in the collage above). 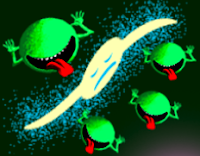 when small galaxies fall onto a larger galaxy, they "harass" the more massive galaxy by slightly perturbing its shape and mixing up its contents, but not to the point of complete discombobulation! when the ratio of masses of the galaxies that merge are 4:1 or more extreme, we call it a "minor merger," which often results in the harassment of the more massive galaxy. 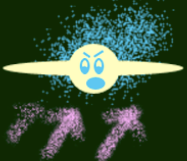 when an individual galaxy falls into the gravitational potential of a galaxy cluster (that contains tens to hundreds of galaxies), the result is usually that the infalling galaxy suffers from ram-pressure stripping. this is when the hot gas that lives between the cluster galaxies (pink arrows) strips off and removes the cold gas that lives in the disk of the infalling galaxy (blue dots).

from what i've read and heard, i think galaxy starvation == strangulation == suffocation! after a galaxy falls into a cluster and has all of its cold gas stripped away, it no longer has cold gas remaining with which to form new stars. since the galaxy has no more fuel (=cold gas), it is (apparently) starving, or suffocating, or being strangled since it is unable to produce new stars! so you can pick your favorite term for "out of fuel."

a less aggressive, but often used term is tidal truncation. this occurs when the interactions between a galaxy and its surroundings strip away the gas and the stars towards the outskirts of the galaxy.

another pleasantly non-violent term is thermal evaporation, which occurs in massive galaxies in clusters. the hot gas that lives between the cluster galaxies heats up the cold gas in the particular massive galaxy in question. in this case, the the galaxy keeps its gas, but the gas gets so hot that it can no longer form stars.

its probably true that each of these terms describes a different stage in the process of galaxy merging. the strength and timescale of any particular stage is dependent on the ratio of the two galaxies involved in a merger, or in the case of a galaxy falling onto a cluster, its dependent on the mass of the incoming galaxy and its distance from the gravitational center of the cluster at the time of observation. but any particular galaxy probably does not go thru every one of these phases.

i still have a hard time remembering which of these aggressive terms describe which specific process, but i'm glad that i have a full list now! what is certainly clear is that we humans seem to think that galaxies regularly commit horrible crimes against each other!!

intelligent one... is the post name... and very informative and simple...

It is said that humans are the only animal that kills for fun. So, it would seem that we would use these labels so that we humans feel less barbaric. Does that make any sense?

This is FASCINATING! Thanks for sharing. And thank you even more for strangling and suffocating the boredom and monotony at work.

Wonderful post! I've always been fascinated by space, stars, galaxies, but I've never understood before all the different things that happen when galaxies collide. Thanks for sharing!