in the few days since curiosity landed, some amazing images have arrived on earth from the event!

in addition to robots roving around on the surface of mars, there are satellites orbiting around it as well, taking photos and monitoring different features of the red planet.  prior to curiosity's landing, scientists running NASA's Mars Reconnaissance Orbiter sent the satellite over to the curiosity's predicted landing spot and told it to shoot some photos of the event.

this is a section of the result, which is a cut out of a much larger, longer image!  you can actually see curiosity, hanging from its parachute as it falls down toward the surface of mars during the seven minutes of terror part of its descent. 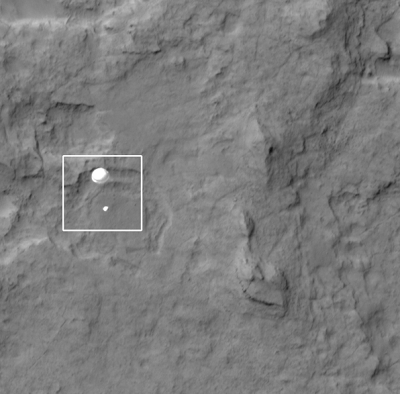 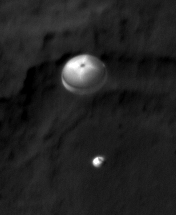 how cool is that?

my other favorite view of the landing of curiosity on mars comes from an instrument dedicated to recording the event:  the mars descent imager, MARDI.

in the video, you can see the heat shield falling off curiosity.  the shield is about 15 feet wide and roughly 50 feet away from the rover in this shot.


to keep up to date with what curiosity is doing each day on mars (each sol), follow emily lakdawalla's blog.