the gift of art

soon after i arrived in ohio last week, my older sister told me she was excited about giving me a surprise that was brewing. i was intrigued, but didn't dwell on figuring out the mystery, because i like the anticipation before such an event! but seriously, i had NO idea what was coming!

my first night in town, we went to see a band and at the show she excitedly introduced me to her friend, pierre, saying "he reads your blog!" for the next week, i ran into pierre and his tiny dog all over town, which seemed strange because i had never met him over the many many many stays i've had in yellow springs.

on my final day in town, she seemed eager for us to walk to the coffee shop, which made me happy because i was very much in the mood for a tasty coffee treat. while i watched my niece and nephew run around like crazy people, in walked pierre carrying a painting. he handed it directly to me with a grin on his face and i was stunned.

my sister had commissioned this well-known local artist, pierre nagley, to paint something for me and this is what he created! 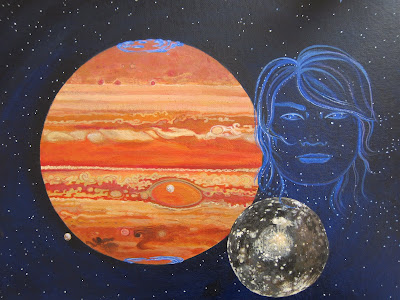 she talked over some ideas with him, but gave him creative freedom in the end. even though he and i had never met, he created this beautiful piece of art - and i couldn't be more pleased!!

the colors are fantastic and the details of the storm bands in jupiter's atmosphere are incredible. there are a few galilean moons floating around and in front of jupiter, including a close up view of callisto. when he saw that i enjoy seeing comets in the night sky, he included the dark features near the bottom of jupiter, which represent the temporary features created by the impact of comet shoemaker-levy 9 in 1994.

here is pierre and my fabulous sister :) 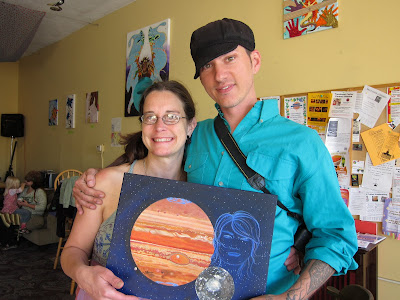 so a big huge THANK YOU to lara and pierre!!

That is SUCH an awesome gift. You are a lucky woman! :)

Why is it that Jupiter looks like cold infected kid with red nose.

I did like the painting, as well as the thoughtfulness and effort that went into putting it all together.

Cheers to your lovely sis and the painter pierre