what a great idea!

prizes for the winners include etsy shopping sprees, stuff from nasa and etsy, and a trip to see the final space shuttle launch ever as NASA’s VIP guest!! and if that isnt enough awesome, your artwork might even be flown on the space shuttle.

the final space shuttle mission is currently scheduled for launch in february 2011 and will voyage to the international space station.

what's great about this contest, in my opinion, is that this contest ideally reaches an audience that science organizations like NASA should be making more of an effort to engage. of etsy's 5.9 million members, 96 percent are women, and most are under the age of 35.

no matter who you are**, submit your creative entries by november 2nd, 2010 (and post them here to so we can all see your work!).

i'm finding myself attracted to the wearable art, like the orbital earrings below, but there are many cool entries so far. 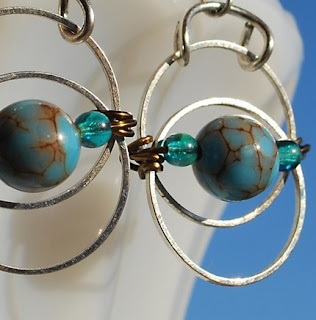 ** the contest is open to legal US residents only.

It's a shame that it's only open to US residents...everyone likes space stuff don't they? I am lucky enough to be able to enter!
Thanks for advertising the contest; those earrings are *very* spacey!