i'm originally from the state of ohio, USA, which is known as the "buckeye state." buckeyes are the common local name of a type of tree that are more generally called horse chestnuts.

ohioans have been inspired to make make necklaces out of the seeds of the buckeye tree in support of the ohio state buckeyes: 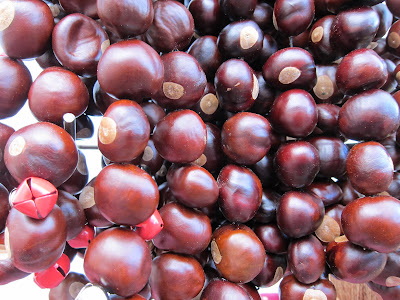 the region is also known for sweet candy treats called "buckeyes" which are made from peanut butter balls dipped in melted chocolate and left to dry. mmmmmm... buckeyes! 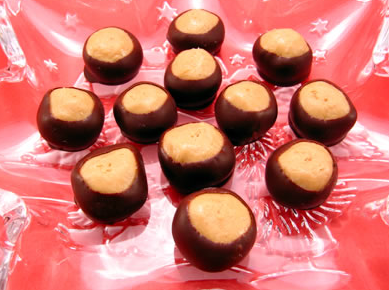 the british, on the other hand, have developed quite a different tradition using the seeds from the horse chestnut trees, which they call conkers. the game of conkers is a moderately violent affair where you string up your conker and try to knock an opponent's conker off his or her string. 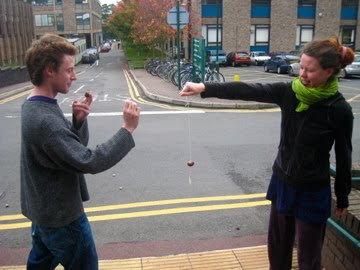 a couple years ago we held a conkers tournament among the astronomers and physicists in our building... the brits wanted to initiate all us foreigners to the tradition, you see. we were warned of a few of the rules, which mainly revolved around forbidden methods to potentially strengthen your conker: soaking in vinegar, drying in an oven, etc... 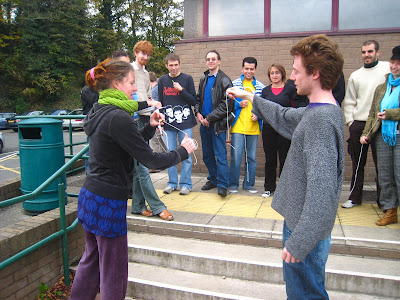 what surprised me is how painful this game can be when your shot is not accurate. if you miss your opponent's conker altogether, which i did quite often, the conker flings around on the end of the string and slams into your forearm. my unskilled conker flicks continued to hit the same spot on my arm and built up quite a painful bruise! ouch! of course i lost my conker during my first battle. 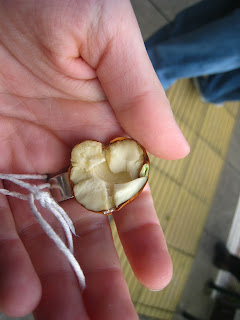 brady haran, who produces sixty symbols, has produced an interesting video about horse chestnut trees for his trees project, which explains a bit more about the game of conkers (but doesnt mention "buckeyes" at all :(