what does the ISS have in common with a 2.7m telescope in texas?

earlier this week, international space station (ISS) resident chris hadfield posted a photo of a hole in the solar array attached to the earth's orbiting domicile.  see it? 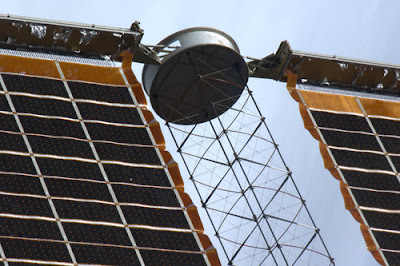 a small space rock shot through the solar array and created that hole.   it was lucky that the rock didnt go through the main compartments of the ISS.

unexpectedly the photo reminded me of my phd days observing with the 2.7meter telescope in west texas at mcdonald observatory. this telescope is a beast - with a casing built by a company that also built submarines! 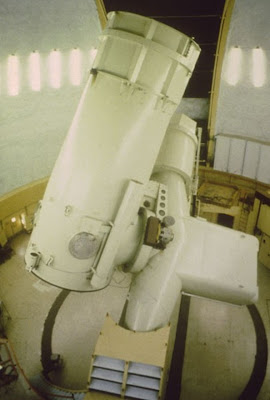 the primary mirror has an interesting, unexpected history, that also involves holes, but of a different origin.  in 1970, a new employee at the observatory in west texas was struggling to settle into the quiet life experienced by those living in the isolated region.

when the telescope is lowered all the way, you can walk right down along the metal telescope tube and stand next to the thick mirror.   this guy was unhappy about something that i dont understand, and it caused him to walk up to the telescope with the gun and shoot directly at the primary mirror at point-blank range.

much to his dismay, the powerful gun shots did not shatter the telescope's mirror!   the stories i've heard describe how he then picked up a mallet in his frustration and tried to hit the mirror repeatedly in order to damage it.  no luck.

he was stopped quickly after that by the security on site at the observatory, but the damage to the telescope was done, and you can still see it today.

it turns out that the bullet holes did not cause very much damage to the thick fused silica, which is definitely stronger than your average glass mirror.   the engineers and astronomers at mcdonald observatory at the time did several tests and determined that the holes only blocked 1% of the total amount of light that bounces of the mirror into the rest of the light path.

they sanded off the inside of the holes and painted them black in order to prevent light from bouncing around inside the system, and otherwise, nothing changed.

whenever anyone visited me at the observatory, my tour would include lowering the telescope and showing off the bullet holes, because they're just so crazy!   here i am on the top of the dome that contains the 2.7m telescope (i wasnt officially allowed to be up there so ssshhhhh, dont tell anyone...). 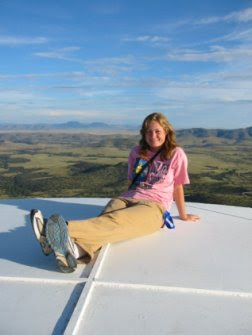 i should say something here about the ridiculous US policy on gun control.   i've tried to write posts about this issue a couple times now, once after the shooting of representative gabby giffords in arizona in 2011, then after the sandy hook elementary school shootings last year, and another after the boston marathon bombings last month.  but i havent been able to finish those posts, for various reasons.

instead, i'll just link to the daily show's series about the issue, which highlights the fact that australia instituted effective gun control policy three months after a major massacre occurred about a decade ago, and the policy has been 100% successful. the number of both gun-related homicides and suicides had decreased dramatically.   the evidence is obvious.   US politicians must stop pandering to lobbyists.   when did policy become about getting voted in during the next election and not about the best results for the people in the country?   it's despicable.

You see, gun culture is very influential on how mad science technicians go over the edge. When I was a PhD student here in Australia, a technician tried to kill a PhD student in the SHRIMP lab. But he used an axe, not a gun. Luckily, the main vacuum chambers are 10mm stainless steel- and the student survived.

I fully agree Amanda. Gun control should be instituted just as soon as the governments of the world destroy their weapons as well.

That said, I do not think the handful of individuals killed by other individuals using guns should receive so much media and nationalistic hype. While very sad indeed the death toll is insignificant by 3 orders of magnitude compared to the deaths from the most prevalent weapon in 1st world countries: the automobile.

And even the much greater number of automobile caused deaths aren't even a drop in the bucket compared to the number of people killed due to the lies from national governments leading their citizens to war (ie, vietnam, iraq, etc).

I don't see how one can trust such national governments with firearms but not the individuals that make up those governments.

The McDonald telescope story was fascinating but the segue to gun control was forced at best. I look forward to more astronomy related posts.

fair points, super. thanks for the feedback!

To be sure, increased gun control & not increased mental health care will end the school shootings. Health care pundits are going down.