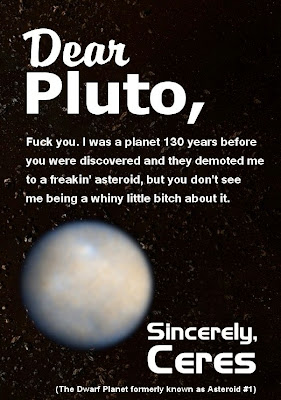 many bodies started to be discovered in the region between mars and jupiter, ceres just happened to be the first one we saw. william hershel first called them asteroids ("star-like") because "they resemble small stars so much as hardly to be distinguished from them, even by very good telescopes." planets, on the other hand, could be resolved at the time and features on some of their surfaces seen.

once it was realized that there existed an entire class of these objects, ceres was no longer considered a planet, but designated officially as "1 Ceres" since it was the first asteroid discovered.

a similar series of events recently caused the demise of pluto's status as a planet. astronomers started discovering many objects like pluto that even had the same strange orbital quirks as pluto. by the mid-2000s there were enough of these objects in the "kuiper belt" that mike brown argued, successfully, that pluto should no longer be classified as a planet.

in fact, he just wrote a book about his entire experience demoting pluto called "why i killed pluto, and why it had it coming." i'm reading this book right now and i can highly recommend it to anyone who might be interested in the story of pluto, or just generally in how astronomy/science is done.

anyway, i first started this blog around the time the IAU voted on pluto in 2006. you can read an entry about the process: here.

Hello!
Found this while searching the web for a goodbye song to explanet Pluto!
http://video.google.com/videoplay?docid=4084466890670321082&hl=en#
Off topic at the end of the clip but an interesting idea!
Peace and Clear Skies!
7718

Hello
I found this while looking for a farewell song to explanet Pluto(now known as dwarf planet Pluto)
Kinda weird but I found it funny!
http://www.veoh.com/collection/RLKast/watch/v282750P7xmrYq6
The end of the clip is off the topic.
Peace and clear skies!
7718

Dear Ceres,
Who is this "they" you seem to care so much about, and what are these "years" you measure yourself by? Sounds to me like some dwarf really wants to be Earth's little bitch! I say free your asteroid and your mind will follow. Don't let those narrow minded Earth-fucks tell you dwarf planets are not planets. The same group says that exoplanets are not planets so what the fuck do they know? With love from the coolness of the Kuiper belt,
your pal Pluto