this week we're reminded to learn from our mistakes... by not forgetting them! three major NASA-related events that have helped shape our image of space exploration, all occured in various years during this week. for a more developed summary, see professor astronomy's blog. i'll just mention the two events that i remember from personal experience.

1) on January 28, 1986, the shuttle Challenger exploded. i was young at the time, but i have a very vivid memory of the moment. my class was privileged to watch the launch live and we were all very excited! i sat on the floor, next to my best friend jessica, looking up at the TV. the image of the liftoff and the arc made by the smoke in the air is very vivid in my mind. then the line grew into an unexplainably big puff ball while white streaks shot out to the sides. the explosion seemed surreal and confusing. my young mind's first thought was "that's odd. i don't think that was supposed to happen." it was ultimately the reaction of the teachers in the room that made me understand the seriousness of the situation. i remember deciding at that moment that i did NOT want to be an astronaut! 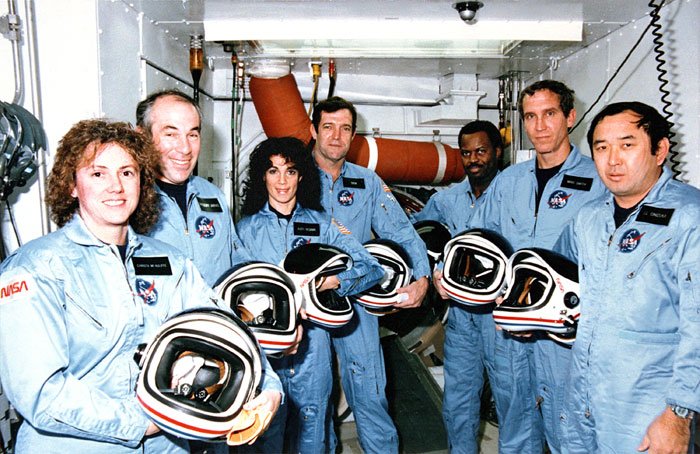 2) On February 1, 2003 i was in west texas observing at the mcdonald observatory. i was there for an 8-night observing run on the 2.7m telescope and became excited when i heard the shuttle columbia would pass over texas on its way to landing in florida! depending on the shuttle's final descent path, i would be able to see it crossing the sky, low to the north, early in the morning. i followed NASA's liftoff webpage all night to track columbia in its orbit, in anticipation of seeing the shuttle! while i finished up some morning calibration exposures, i stood out on the catwalk that surrounds the telescope.... looking off to the north. NASA estimated that the shuttle would pass by between 7:30 and 8am (central time, of course), so i watched from about 7:30 until 8:15am (it was february and cold on the mountain top!). The sun had risen by 8am and since the shuttle would have crossed the sky very low on the horizon, i suspected that i would not see it at all. so i finished the night's observing a little disappointed having not seen the shuttle. i closed down the telescope, walked across the road to my dorm room and went straight to sleep.

it wasnt until i woke up around 4pm that i found all the other astronomers gathered around the TV watching CNN. i was surprised, to say the least, when i heard the news that columbia had broken apart during re-entry! most of the visiting astronomers and observatory staff there were very emotional about the event. this created a somber atmosphere as we discussed the effect of the 3000 degree heat generated during re-entry and our speculations as to what could have happened. as the shock slowly wore off and the reality set in, i reflected on my thoughts that early morning as i waited to see the shuttle.

i think professor astronomy sums them up, and provides excellent insight into these events... so i will leave you with a quote from his blog:

It is important to remember these people and accidents. These men and women willingly put their lives at risk to explore space, bravery that deserves recognition. But also, each of these accidents may have been preventable. A string of human errors and cultural issues led to each accident. These errors are much easier to see in retrospect than they were ahead of time, and so we should be careful in assigning blame to freely. Yet we can and must learn from these mistakes to protect future lives; to ignore these lessons would be an unforgivable failure.

Finally, we should all recognize that more lives will be lost in the future. Space travel is extraordinarily dangerous. As private companies also begin to open space to civilians, we must accept that there will be accidents and lives lost, and most of these will probably be due to human error. Let's just hope that those errors are due to exploration and humankind's pushing of the envelope, and not due to our failure to learn from our history.

I remember the Callenger explosion well; I was in hight school at the time, came back from lunch to the clasroom for our World Studies/Geography class, and instead I found everyone was shocked, just watching the TV...

The Columbia tragedy was more recent, of course. I rememember it as well as a dark, somber day, where I called up a friend on his b-day, and we just talked for a while about the accident...and the coming war. It was the time of that the little president was making his lying pitches about wmd's or some other bull in Iraq, and very few people in the us media were openly chalenging what they should have been challenging...how depressing.

ANyway,like "profesor astro" writes, hopefully we will all learn from mistakes in order to save lives.

Great post! I think everyone knows where they were that day, as it has been with so many other terrible events.

One good thing about this day is that I find so many people are remembering it with thoughtful blog posts. I'm adding you to my link list on my own blog.