last weekend i ventured to melbourne to see a day of live tennis action at the australian open.  we spent about 10 hours one day watching tennis matches and i was never bored for a second.   following that trip, i have been engrossed in the tournament all week, which culminates this weekend in the finals matches.

one thing i appreciated while at the tournament is that there are very few professional sports where the women's game is as recognized and well-respected as the men's.   i wish there were more.   women's cycling gets some attention, but there is no tour de france for women.

i enjoy watching the women's soccer world cup matches more than the men's.   women play with more finesse and dont participate in all the ridiculous diving on the ground, which means the game is more fluid and continuous and harnesses the spirit of the "beautiful game."  unfortunately, the top women's soccer players in the world do not get paid enough to play the sport professionally.   so in addition to their rigorous training regimens, they have full time occupations that take their focus away from bringing their sports to their full potential.

in light of the fantastical sums of money men's professional sport players receive each year, i find it incredibly disappointing that female athletes are not treating with more respect.  do better, world!

anyway, back to the tennis.

the first match we saw live was the eventual tournament winner, victoria azarenka.  i was not too impressed by azarenka's stunt during the semi-finals, but she was an impressive player to watch.  i never appreciated the efficiency and power of their serves while watching matches on tv. 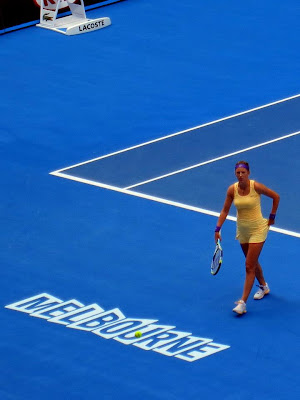 we next watched serena williams, an intimidating body of elegant muscle, easily win her match.   she served a 207 km/h ace in this match.  incredible. 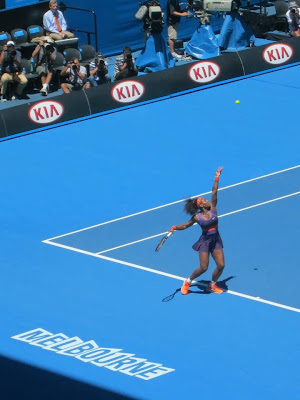 also, i love the design of that melbourne logo.

i found this utterly baffling advertisement in a bathroom stall.  what the...? 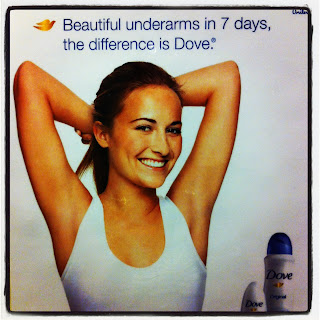 the final match we saw in the rod laver arena was the 2012 olympic champion, andy murray.   he has an impressively defined muscular body, way more so in person, even from our distance, than he appears on tv.  i admit, i was surprisingly distracted when he was on our side of the court! 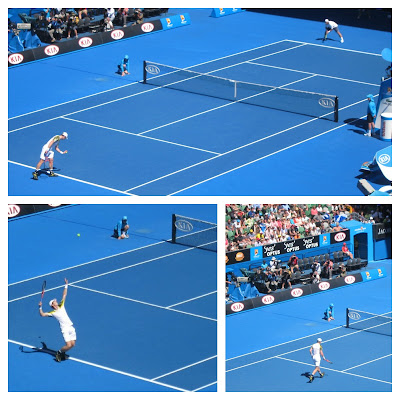 we also got to see venus and serena williams play a doubles match together. 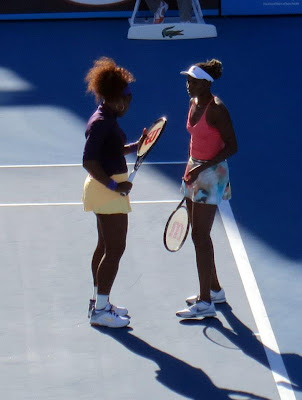 very happy in the sun :) 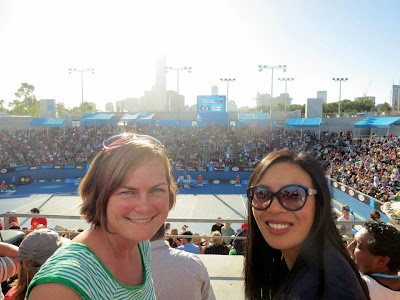 I don't people realise just how much tennis you do get to see if you buy a decent one day ticket with court 1 or center court access as well. Particularly during the first week + weekend, it's not that expensive and such an enjoyable day. (I grew up in Melbourne before moving to Sydney 20 years ago and have spent more than a few days at Flinders Park watching that event.)

Sports are a very physical, health, & appearance driven industry, not unlike modelling. There's probably more opposition to that than there is to not having female sports. You can expect men to exercise, lose weight, & worry about their diet, but it's a scandal to place the same demands on women.

Anyways, 30 years ago professional sporting events were no big deal. $9 got you to see the greatest athletes. Times have changed.