four finches - species are not immutable

i've seen many tattoo variations of darwin's four finches at the science tattoo emporium, but this one is definitely my favorite. it's subtle and artistic, beautiful and full of meaning! 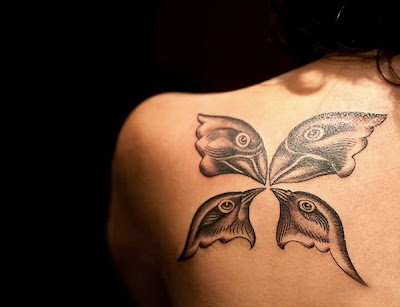 while probably not the biggest influence, the finches that charles darwin found on the galapagos islands played an important role in helping him recognize the reality of the evolutionary process... that “species are not immutable.” the finches he found on different islands shared similar size, coloration, and habits, but the sizes and shapes of their beaks were so different that he originally thought they were all completely different types of birds. turns out the beaks are highly adapted to the different food sources eaten by birds in different locations.

back to tattoos though, while i whole-heartedly agree with what david mitchell says in his column this week in the guardian, i still like my tattoo ;)