the sun as art

the first image in the video is a composite image of the sun created from several different filters. i love the colors - it looks like art to my eyes. then the video shows a huge prominence growing from the upper left of the sun and then breaking apart. these loops are formed because of the sun's magnetic field. the big arc of solar stuff follows along magnetic field lines, giving us clues to their structure and strength.


the SDO will study how and why the sun's magnetic field changes. the effect of magnetic fields remains to be one of the largest mysteries about all objects in the universe because magnetic fields are mathematically complicated beasts with large influences but insignificant observational clues. in fact, at professional astronomy meetings when someone inevitably asks a person presenting their research about whether they've taken into account the effect of magnetic fields, the audience heaves a long collective sigh and rolls their eyes back to the speaker who doubtlessly answers with "not yet, due to their complicated nature." 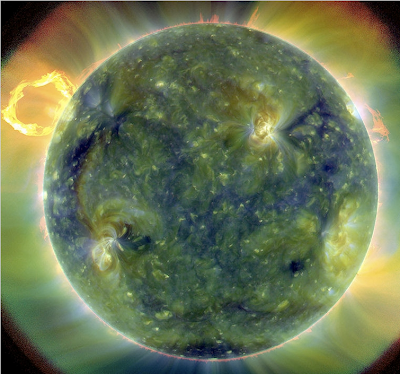 the full resolution version of the image above (download here) is stunning!

Just watched a story about this on the Today show a few minutes ago. These are great pictures and the hoped for information is mind-boggling to me. Your journal does make me wistful and I wished that I had taken my interest in the stars and space a bit more seriously.

Anywho, it isn't too late to start and I will have your blog for my inspiration!!

This video of the sun is so amazing. The picture quality is just great.