siding spring obs fires: before and after fires

today i received some photos from steve lee that incredibly demonstrate the destruction the wambelong fire around siding spring observatory.

the first two photos were taken from the catwalk of the 4-meter anglo-australian telescope (AAT), looking out over the warrumbungle national park.


the next two show the view from the AAT catwalk to the northwest, over the water tower, the director's cottage, lodge, and lots of other white telescope buildings.


in the after shot, there is absolutely no ground cover left.   all grass has been decimated and only dirt and stones remain.   there are also fences blocking the area around the destroyed director's cottage and lodge because they are contaminated by asbestos.

this image shows the road that leads up to the  observatory.   at least one hundred potentially dangerous trees have been cut down so far.   i cant even tell exactly where this is because usually the foliage is so thick i can't see the distant hills.

despite these photos looking so stark and harsh, it's interesting to consider that fires have swept across australia long before europeans landed a few centuries ago.   the original inhabitants of australia practiced regular controlled burning after learning its responses on various plants and animals.

banksia, for example, have tightly-closed flowers that react to the heat from fires to open and release new seeds.  eucalyptus also fare well in fires.  they are highly flammable because they release oils into the air when their leaves are heated (causing the distant horizon to appear blue on a hot day), but they have "buds" buried deep in their bark that sprout so that they can survive the intense temperatures of most bushfires.

since europeans landed and developed major settlements, the bushlands have thickened and grown more fuel so such controlled burnings are impractical.

i'm not an expert on these issues, but its interesting perspective and makes me even more overjoyed that the measures taken to save siding spring observatory against fire were enough in this case (when combined with a bit of luck)! 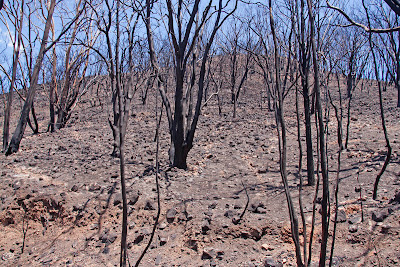 Wishing all collaborators at SSO the very best with cleaning & rebuilding this remarkable place!

The photo of the road, looking back at the AAO, is taken at the point where one goes around the U-bend, just before the proper descent down the mountain begins.