hello everyone.   nice to write to you a few days after the solstice, a few days after the date some people feared the world would end.  i'd like to say "i told you so," but mostly i'm just happy that i wont be receiving ridiculous emails anymore (after having received them steadily for the last THREE years) or witnessing young students i talk to about science genuinely fearful because they heard some adults talking about this nonsense.

my cynical side reminds me that it's just a matter of time before these easily-influenced people latch onto the next doomsday scare-for-all.   my optimistic side hopes those people will remember this non-event and believe in trusted sources of information instead of believing in silly rumours that dont make sense.   please trust me, the so-called planet niburu does not exist.

anyway, here is a beautiful photograph of the mayan pyramid, el castillo, located at chichén itzá in the yucatán peninsula of mexico.  orion is there, peaking brightly behind the illuminated clouds. 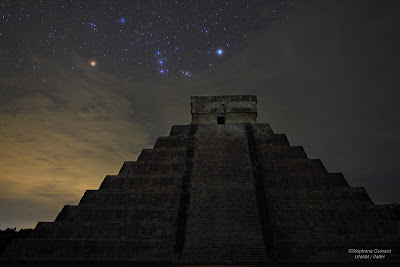 In any case, best wishes for Merry Christmas and Happy New Year

Surprisingly dark sky for a famous artifact where a large population used to live. Surprising that when civilization redeveloped, it was completely removed from its past location.