Last week, I traveled to Far North Queensland to witness one of the most amazing astronomical events accessible to earthlings: a total solar eclipse. My perspective was unlike most amateur and professional astronomers who traveled from afar to feel the chill of the Moon's shadow, because I camped out at a music festival that occurred along the path of eclipse totality. From our location, the eclipse, when the Moon passes exactly in front of the Sun, was perfect.


The energy among the crowd the night before the eclipse was intensifying. Many festivalgoers stayed up all night, listening to the continuous music from any one of six stages. I opted to wake up early, before sunlight brightened the horizon, in preparation for the 6:38 am beginning of totality. I walked to the main open area of the festival park, along with thousands of other excited people. 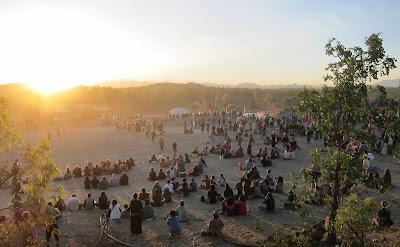 When the Sun finally broke above the line of distant mountains, the crowd basked in a crisp orange sunrise glow. We all cheered with the recognition that the Moon was already covering a tiny sliver of the Sun. Our anticipation grew as the Moon slowly slipped in front of the sun, and the pair rose slightly higher above the horizon. 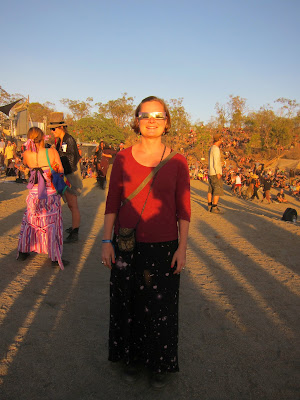 About 40 minutes later, the light around us started to fade and grow noticeably redder. The temperature had risen with the sunrise, but dropped down several degrees as the Moon covered more and more of the Sun. We looked through our solar glasses, awaiting the big event. 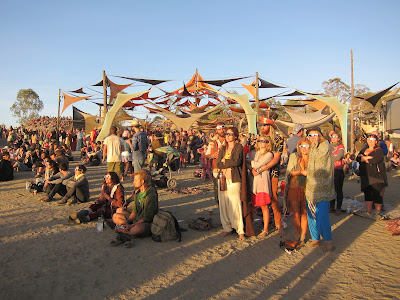 And then it happened. The otherworldly moment when the Moon's shadow swept over us, and the very bright, eye-damaging yellow photosphere we recognise as our star disappeared. A dark orb hung in the sky, unrecognisable as the Moon, backlit by huge, unfamiliar, shimmering rays of white light.

The sight felt so strange, so eerie. The excited crowd settled into a stunned silence, before erupting in a collective rumble of appreciation and awe. What must ancient people who witnessed this event have thought when the sun faded to black so unexpectedly, only to pop back to normal mere minutes later?

Intellectually, I thought I knew the feeling I would be experiencing, since this would be the second total solar eclipse I would witness, after an eclipse in China in 2009, but I was completely overwhelmed. As soon as the darkness set in, the Sun's corona stretched so unbelievably far out around the tiny black moon, my mouth stuck itself in a goofy grin of pure pleasure, and tears came instantly to my eyes - much to my annoyance, because they blurred my vision!

During totality, I was overcome with a feeling that I was more unified with the universe. Despite knowing the fact that we live on a giant sphere of rock, zooming around a big ball of fire at an unfathomable pace, witnessing this event made me feel that power. For two full minutes we sat wonderstruck, staring at the surreal object hanging in the sky, yelling out insufficient adjectives while feeling the chilled air on our skin.

And then it was over. The brightness of the edge of the Sun crept around the Moon. The small black circle disappeared in a flash and we were instantly back to normalcy. How quickly the vision of the bright Sun snapped us out of our revelries. Home again, more connected to the cosmos.

Most of us sat still, watching the Moon finish its path across the Sun's face, reflecting on the experience and its unexpected intensity. After another 30 minutes, the music started playing again and many entranced witnesses began dancing in the restored morning sunlight.

I have not seen a single photograph or video that has captured the pure magic feeling of witnessing a total solar eclipse. It's an unexplainable life event. It's a lucky coincidence that our Moon and our Sun happen to appear as the exact same size in our sky and even cross paths once every 18 months or so. Incredibly inspiring.

I'm already excited for the possibility of chasing the Moon's shadow and witnessing another eclipse, despite the knowledge that earthly weather could prevent the success of such an endeavor. The feeling is worth the effort. I'm officially hooked!

link for the full COSMOS article

LOL... I wonder if the crocs decided to abandon the spot after they saw you jump in!!

I am so glad for you and I enjoyed your reporting of your experience. I am marking down the 2017 eclipse and I have high hopes, as I now live in Nebraska that I will have a great view from my town..!

Great description and love the photos.

I hope I will be free to head to maybe Broome for the next one over Australia?