science in the pub

last night i participated in a "science in the pub" event in coonabarabran near siding spring observatory.  the event brings together a couple scientists to debate and discuss a particular topic, answer questions from the crowd, and just generally have an entertaining time!


our topic last night was "the end of the world is night.  or is it?"  we spent some time debunking all the current doomsday nonsense (not much of a debate as the three astronomers all agreed on this topic) and then we talked about fun and exciting real potential fates of our little planet earth.  these are much more interesting, i think.

a standing tradition at this event is for the astronomers to further entertain the crowd by reciting a poem or singing a song.  i decided to use the occasion as an excuse to finish a new astronomy song i've wanted to write for a while now!  luckily (you decide),  allison, from astropodcast, was in the crowd and recorded the performance.  back up guitar is provided by the endlessly talented fred watson.


hopefully i can provide a better version of the song in the future (this is only the second time i've ever played it to people!), but in the meantime,  here is my updated version of twinkle, twinkle little star :)


at least it was the right audience for the song! 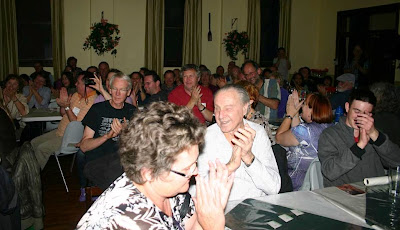 thanks to Pete Poulos from iTelescope for providing the photos!

Amanda, may I just tell you that you're absolutely amazing? :)

Please write down the words, the world must learn this!

Brilliant, please write down the words!