a couple weekends ago, we had more of an adventure than we intended to have. a group of us decided to head out into the wilderness to enjoy the first sunny day sydney had seen in a while (i know - ridiculous for summertime here!).

we hiked next to a river, along some extremely muddy trails, for about 4 hours... 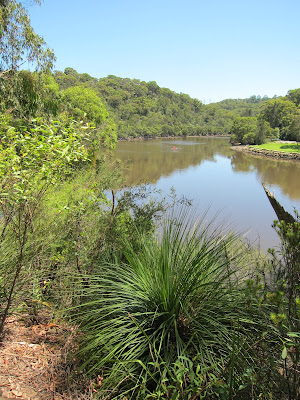 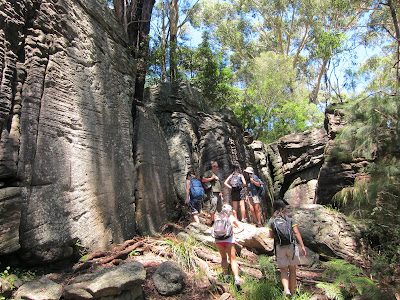 ... and then decided we'd had enough and collectively agreed to go explore a new beach! north curl curl beach, along the northern shores of sydney's seaside real estate, didnt disappoint. 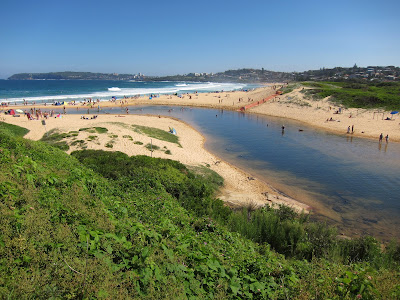 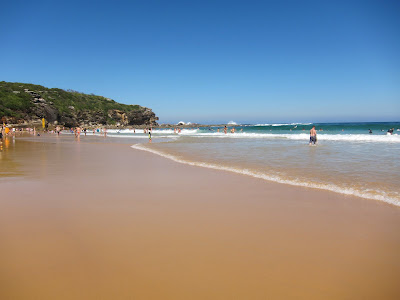 since none of us came prepared for a trip to the beach, we just carried our shoes as we walked along the coast, fully dressed. 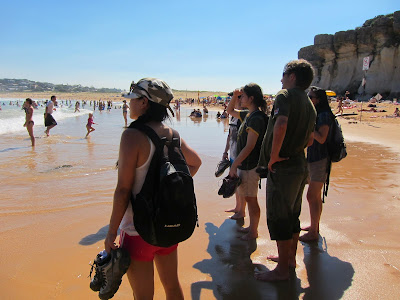 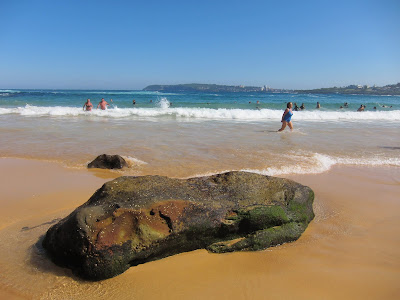 we spotted a lovely rock pool at the northern end of the beach and walked toward it as the tide started to come in. 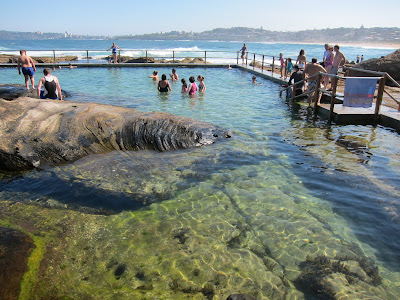 the pool felt peaceful and calm, and i had received enough sun for the day, so stayed over on the edge where i took the photo above. my friends, on the other hand, decided to walk out along the edge of the pool, to get a closer view of the white mist that the waves gently sprayed up in the air.

unfortunately, we didnt realize, nor was it marked anywhere, that a common wave feature at this end of the beach is much more powerful than anything we saw during our walk over. just as my friends got to the edge and pulled out their cameras to capture the beauty, a HUGE wave spilled over the rocks, looking something like this:


my first reaction at seeing this wave was actually to laugh. the big splash hit the height of their chests and it was just such a surprise that it was amusing.

but... by they time they looked at each other with smiles of disbelief on their faces, a second, much more powerful wave came barreling over the rocks, completely swallowing them with white water! they completely disappeared from my sight, and my body froze as i realized the wave knocked them backwards into the pool!

at this point i was genuinely scared because i didnt know how deep the water was or if there were big, sharp, coral rocks waiting for them to hit! as they eventually started popping their heads above the water's swell, i felt relieved, but saw that one girl was very shaken by the event. i found out soon that she doesnt know how to swim and had swallowed some water when the wave knocked her off the edge. she was in hysterics for a little while as we tried to calm her down.

as the rest of my friend made their way over to me, they were recounting all the things in their backpacks that went flying off into the water, including shoes, cameras, phones, keys, backpacks, etc... 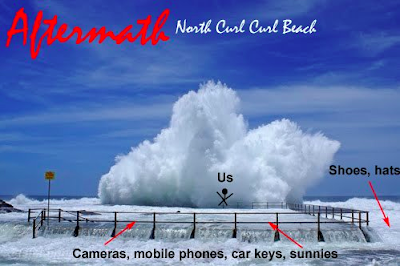 they said that as people helped them out of the pool, some jokingly said "we were going to tell you that you shouldnt stand on the edge like that, but we didnt have time!" thanks a lot.

it was at about this point that they started noticing i was completely dry, and i had to admit that i had never been happier to be such a sun-wuss.

we sat next to the pool for a while recovering from the event and wondering what we would do, considering the keys to the car were somewhere under water! luckily, the teenagers around the pool felt so bad for us, that they dove in to the water and kept finding things for us - cameras, keys, IDs, shoes... it was amazing! after 30 minutes, we had recovered everything except for one shoe, although most of the electronics were water-logged and unusable.

none of us on the adventure that day were aussie. i've recounted this tale to many australian friends since the incident and they almost all immediately chuckle and say something like "oh yeah, rock fishing is the deadliest sport in australia!" when i complained about the fact that there were no signs anywhere warning us of these waves, one friend said "but then they'd have to put signs up along *the entire* coast!" i guess that's true.

as a friend on twitter said: even the water in australia is trying to kill you! lesson learned, the hard way.

I guess there's a downside to being used to signs everywhere.

Re waterlogged electronics: don't switch on, remove battery, rinse thoroughly in fresh water as soon as possible, leave to dry. You might get lucky.

Australia isn't the nanny state Americans are used to. Do they have to pay off their credit cards, too?